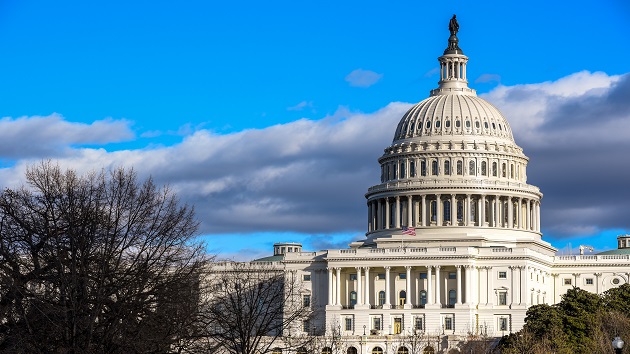 (WASHINGTON) — Ahead of the Memorial Day recess, and nearly halfway through the year, Congress has only passed 17 laws.Major laws that the 116th Congress has passed include reopening the government following the shutdown, a bipartisan public lands measure and changes to Medicaid.Some of the other laws passed changed the address of a post office in Charlottesville, Virginia, created an award for classified school employees like security officers and cafeteria workers, and clarified the grade and pay of podiatrists in the Department of Veterans’ Affairs.One measure appointed retired Army Capt. and former Senator Bob Dole to the rank of colonel, and another named a Utah Department of Veterans’ Affairs outstation in honor of Major Brent Taylor. Politico Playbook first reported the tally of measures passed.This isn’t the first time a divided Congress has passed fewer measures at this point in the year.From January to late May 2013, when Republicans controlled the House and Democrats the Senate, congressional lawmakers passed 11 laws. Similarly, from January through May in 2011, a Republican-controlled House and Democratic-controlled Senate passed 16 laws, according to congressional records.This comes amid President Donald Trump’s clashes with Democratic congressional leaders. Trump tweeted Thursday that Democrats “are getting nothing done in Congress.”“All of their effort is about a Re-Do of the Mueller Report, which didn’t turn out the way they wanted. It is not possible for them to investigate and legislate at the same time,” Trump wrote, echoing his remarks after a meeting on infrastructure fell apart Wednesday.Senate Minority Leader Chuck Schumer shot back Thursday.“He should look at all the bills the House passed and how many of them McConnell has put on the floor,” the New York senator said, referring to Senate Majority Leader Mitch McConnell. “The answer is none because McConnell has made the Senate a graveyard.” So far this year, more than 100 bills have passed the House but have not made it through the Senate or onto the president’s desk, including a voters’ rights bill, a climate bill, and the Equality Act, sweeping legislation that protects LGBTQ people from discrimination in the workplace, housing, service and public accommodations.Approximately 20 bills have passed in the Senate and have not yet made it through the House, including the recently passed bill to stop robocalls. Copyright © 2019, ABC Radio. All rights reserved.

Steve Martin shares hilarious thoughts about getting the COVID-19 vaccine
‘The Marksman’ dethrones ‘Wonder Woman 1984’ at the box office with $3.2 million weekend
Rep. Lou Correa latest member of Congress to test positive for COVID-19 following siege on Capitol
Nearly a dozen ex-military members among those arrested in connection with Capitol riot
“Oh, it’s fantastic!” Diane Lane loves the fans prompting the release of the ‘Justice League’ “Snyder Cut”
‘Cobra Kai’ star Martin Kove had to be “persuaded” to join the ‘Karate Kid’ reboot