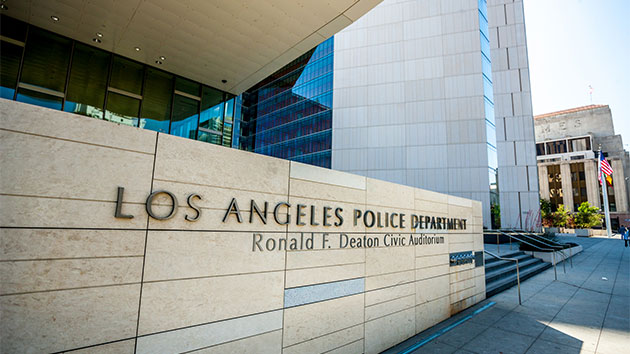 On April 20, at 9:20 at night, two LAPD Gang Enforcement Division officers spotted a white BMW rolling through a stop sign, turning left and then speeding ahead, LAPD Captain Giselle Espinoza said in a Critical Incident Video Release compiled from the officers’ bodycam videos and neighborhood surveillance videos posted on YouTube.

After a short pursuit, the driver suddenly stopped and exited the car, then ran with a gun into the Pueblo Del Rio public housing project in LA’s Central-Alameda neighborhood, Espinoza said.

On April 20 LAPD Newton ofcrs stopped a car for running a stop sign, the driver fled on foot & they gave chase. A bystander then came out of nowhere & shot an ofcr at point-blank range. Fortunately, the ofcr survived this terrifying incident. Full video 🔗 https://t.co/zh9KXInqiT pic.twitter.com/WjCg4wJ9jn

The two officers chased after the driver, who they described as a black male, the video shows. But then, a second man wearing in a white shirt, who was later identified as Curley Duff, is seen approaching one of the officers, Enrique Trujillo, the video shows.

Duff, 39, pulled out a handgun from his waistband and shot at Trujillo, who then fired back several shots. Both men were injured in the gunfire. The first officer then doubled back to assist his partner.

On April 24, prosecutors charged Duff with the attempted murder of a police officer.