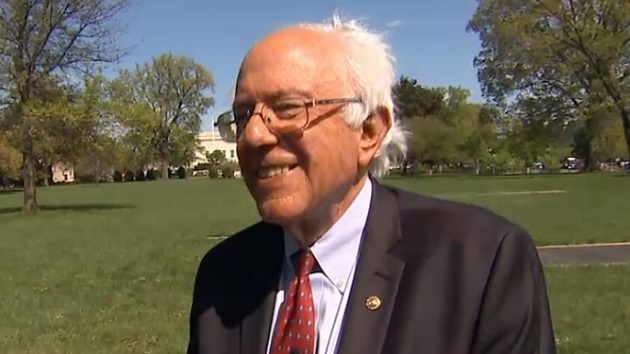 (MONTPELIER, Vermont) — On a sunny day on the Burlington, Vermont, lakeshore in 2015, an independent U.S. senator with a relatively low national profile shocked the political establishment by turning out a boisterous crowd of thousands as he kicked-off his unlikely presidential campaign.Now, almost exactly four years later and 40 miles down the road, in the shadow of the statehouse, Sen. Bernie Sanders, I-Vt. – today a political powerhouse with millions of ardent followers who has become the preeminent driving force of the Democratic Party’s recent progressive transformation – returns home for the first Vermont rally of his 2020 campaign.Sanders’ journey from his isolated perch in Congress’ upper chamber to his current position as a Democratic presidential primary frontrunner is a long story of backlash against the Washington, D.C. political establishment and an ideological shift that has moved the party closer-than-ever toward his long-held Democratic socialist beliefs. But also one that is less of a surprise to his constituents, some of whom who have supported the senator and his impassioned, independent streak for nearly four decades, ranging back to his eight years as Burlington’s mayor.To that point, a crowd of thousands, similar to his 2015 launch event, is expected to flood this town – America’s smallest state capital by population – to welcome Sanders home Saturday, three months into a second presidential campaign that has found him consistently occupying a top-tier position in polls, as he runs on a platform that is remarkably unchanged from that of four years ago.On May 26, 2015, Sanders’ home state rally was something of a national introduction, despite a tenure, to that point, of 16 years in the House of Representatives and eight in the Senate. Though the senator announced his run that year at a non-descript Capitol Hill news conference a month prior, in Vermont, before a much wider audience, he would touch on the key issues that have come to define both of his presidential campaigns.”Today, we say clearly enough is enough. This great nation and its government belong to all of the people and not just a handful of billionaires,” he said in 2015 — a line he continues to repeat nearly verbatim in every one of his stump speeches — adding, “There is something profoundly wrong when the top one-tenth of 1 percent owns almost as much as wealth as the bottom 90 percent. This has got to change and, as your president, together we will change it.”Though it is all-but-certain that Sanders will speak to that theme of economic inequality and touch on other major issues of recent focus, like education and workers’ rights, it is also likely that the senator will take the opportunity in the Green Mountain State to recount his successes for Vermonters throughout his career in public office.On Friday, Sanders’ campaign released a video highlighting his years leading Burlington, including his razor-thin margin of victory in his first mayoral race in 1981 (Sanders won by 10 votes), and the efforts he undertook in transforming Vermont’s largest city, including rehabilitating the Lake Champlain waterfront, increasing access to affordable housing and supporting the local business community.Saturday’s event in Montpelier is the start of a busy holiday weekend in New England for Sanders who heads to neighboring New Hampshire for events through Tuesday. On Memorial Day Monday, he’ll host ice cream socials with Ben Cohen and Jerry Greenberg of Ben & Jerry’s in Warner, Laconia and Rollinsford, before attending two town halls, in Concord and Londonderry, and a rally in Manchester on Tuesday.Copyright © 2019, ABC Radio. All rights reserved.