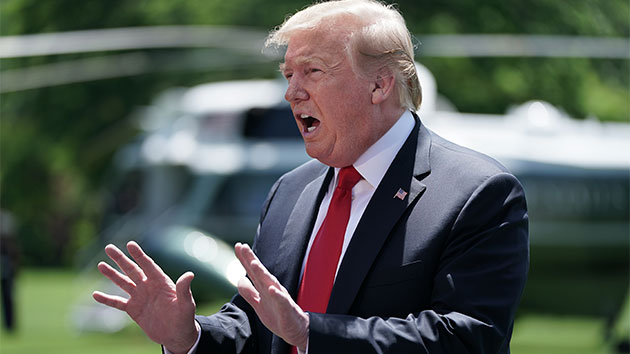 Jabin Botsford/The Washington Post via Getty Images
Posted on May 24, 2019 by ABC News

(WASHINGTON) — The Trump administration announced plans Friday to roll back Obama-era health care regulations that provided nondiscrimination protections for transgender patients and women seeking to terminate their pregnancies, calling instead for new protections for health care workers who cite religious objections to refuse care.The proposal by the Health and Human Services Department, subject to a 60-day public comment period before becoming final, has alarmed advocacy groups that say they are worried transgender patients, in particular, could be denied care, particularly in less populated areas where services can be scarce.Roger Severino, director of the HHS office for civil rights, said the 2016 rule had to be addressed because of a court injunction. He also cited the cost burden of enforcing the regulations.He said the new rule wouldn’t preempt state regulations and it wouldn’t urge medical providers not to treat certain patients.Other anti-discrimination protections, applied to such groups as race, sex and religion, would remain intact.”We have a lot of diversity for health care, We have a lot of options for people,” Severino told reporters on Friday. “This rule does not go in and tell people how to practice medicine.”The move reflects the Trump administration’s position that discrimination on the basis of sex shouldn’t include gender identity. The administration has taken several steps to roll back or limit rights for LGBTQ people, including a restriction on transgender people serving in the military.Most recently a rule announced by Housing and Urban Development Department that would allow federally funded shelters to turn away people citing religious objections and force transgender women to use men’s bathrooms. Secretary Ben Carson has declined to speak about this new rule, which he issued a day after telling a House committee he had no plans to address it.Overall, the administration has moved to expand protections for businesses, including health care workers, to deny services if they feel it conflict with their religious beliefs. HHS had proposed lifting another rule that required family planning clinics that take federal dollars offer women referrals to abortion services; that plan has been put on hold by a federal judge.The latest proposal would alter the government’s definition of “Section 1557,” which is the non-discrimination of the Affordable Care Act. The Obama administration had issued a 2016 rule that expanded the class of people protected against discrimination to include gender identity.The Obama rule also prohibited discrimination on the basis of pregnancy, to include “termination of pregnancy, or recovery” from such a procedure.When asked what problems the administration was trying to fix with the rule, Serevino cited the money spent to enforce the regulation.”It was clear there was no sufficient evidence for the imposition of $3.2 billion in cost,” he told reporters, noting another $400 million that will cost to “lift the regulatory burden.”Copyright © 2019, ABC Radio. All rights reserved.