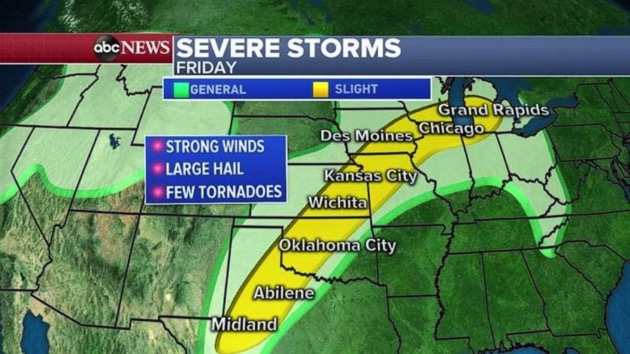 (NEW YORK) — The storm system that brought 97 reported tornadoes to the central U.S. this week finally moved into the Mid-Atlantic on Thursday, bringing an EF-1 tornado with winds of at least 86 mph.Meanwhile, the rain earlier in the week has caused the Arkansas River to continue to flood. It will be in record flood stage this weekend in the state of Arkansas.A very active holiday weekend pattern is expected from the Southern Plains into the Great Lakes.The storm system that brought 11 tornadoes to western Texas and Oklahoma on Thursday expands and moves north into the Midwest and the Great Lakes to end the work week.The biggest threat with these storms is damaging winds, but we can’t rule out a few more tornadoes.Stormy weather continues into the holiday weekend with it moving into Pennsylvania and western New York.The biggest threat with these storms will be damaging winds, but more tornadoes and huge hail are possible in the Southern and Western Plains.With all the stormy weather coming up this holiday weekend, on the heels of a week of heavy rain, numerous flood alerts have been issued for the central U.S.Some areas could see an additional half a foot of rain and more flooding over Memorial Day weekend.Copyright © 2019, ABC Radio. All rights reserved.

Andrew Yang addresses criticism over apartment remarks amid NYC mayor run
Biden to pitch an eight-year pathway to citizenship in day one immigration reform bill
Coronavirus live updates: US reports over 137,000 new cases
‘The Marksman’ dethrones ‘Wonder Woman 1984’ at the box office with $3.2 million weekend
Biden team preparing for ‘any scenario that should arise’ on Inauguration Day
Kamala Harris set to resign from US Senate so she can preside over it