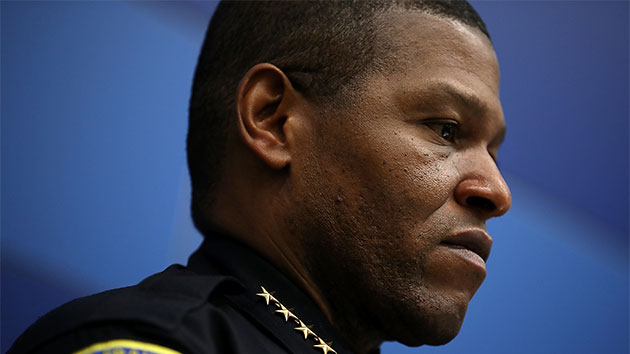 Justin Sullivan/Getty Images
Posted on May 24, 2019 by ABC News

(SAN FRANCISCO) — In an extraordinary move that capped two weeks of growing outrage sparked by the court-sanctioned San Francisco police raid of a reporter’s home, the city’s police chief William Scott on Friday night acknowledged for the first time that the raid may have violated California state law and called for an outside, independent investigation into his own department.

“Over the last 48 hours, I conducted a top-to-bottom review of San Francisco Police Department’s criminal investigation into the unauthorized release of the Jeff Adachi police report,” Scott wrote in a statement released Friday evening. “At the request of San Francisco Mayor London Breed, we are seeking an independent, impartial investigation by a separate investigatory body.”

Scott went even further in an interview with the San Francisco Chronicle published hours later.

Scott’s statement was followed by one from Breed, who said that Scott has “acknowledged the department’s mistakes and apologized” for a controversial raid on the journalist’s home and office, adding that it was “unacceptable and we have to do better.”

On May 10, after freelance reporter Bryan Carmody had reportedly refused to reveal his source, police used sledgehammers to break down the door to Carmody’s home, and handcuffed him for hours while investigators scoured the premises looking for clues to the source who leaked him a police report. Hard drives, phones and other documents were seized and carted away.

California’s shield law protects journalists from being forced to reveal their sources or be compelled to turn over unpublished reporting — including notes, recordings and pictures. The law explicitly bars police from obtaining a reporter’s sometimes highly-sensitive newsgathering through searches.

Despite this, a judge signed off on the warrant prior to the raid, though it remains unclear if the judge was aware at the time that the target of the raid was a journalist.

Carmody’s attorney told ABC News in a statement that “we are pleased to see that Chief Scott apologized to Mayor Breed and to the people of San Francisco.

“We think he owes and apology to Mr. Carmody also.”

“We were also encouraged to see that Mayor Breed called for an independent, external investigation of the San Francisco Police Department’s conduct in this matter. There needs to be real reform in the Department to ensure that the SFPD respects the First Amendment and the independence of a free press.”

Scott’s statement was a dramatic shift from just three days ago, when he held a press conference and said his department was investigating the reporter for allegedly conspiring to steal the report.

For two weeks after the raid, police official dug in their heels, even as San Francisco’s mayor, district attorney and California Governor Gavin Newsom publicly criticized the move, and in a press conference on Tuesday Scott had said that “our actions reflect that we believe Mr. Carmody was a suspect in a criminal conspiracy to steal this confidential report.”

He charged that Carmody “went past doing [his] job as a journalist,” without specifying how.

Even then, though, Scott seemed to be starting to soften his stance on the raid, suggesting that the use of sledgehammers may not have been appropriate.

“We know that looks bad,” Scott said. “I’m not here to try to defend” the raid.

The leaked police report at the center of the raid concerned the death of a prominent San Francisco public defender and vocal critic of the city’s police department, Jeff Adachi – which painted the longtime lawyer in a negative light.

The report detailed how Adachi had been with a woman who wasn’t his wife in his final hours, before he was found unresponsive in an apartment littered with empty booze bottles.

In April, one of the city’s 11 supervisors called a meeting to express her outrage over the leak of the report, according to the Washington Post. At the meeting, a deputy in the public defender’s office, Hadi Razzaq told the audience about a memo his office had compiled and forwarded to San Francisco police officials about a “stringer” – slang for a freelance reporter – who had been offering to sell Adachi’s death report to some news outlets for $2,500.

Freelance reporters as part of their job obtain information of news value – whether it be a police report, a picture or exclusive video – and negotiate to sell it to local news outlets, which are often too short-staffed or insufficiently budgeted to do much investigative reporting of their own.

That said, the news value of any specific piece of information or video is ultimately the decision of the news director who chooses to purchase or pass on the material.

“If it is true that this report was actually sold, it raises significant ethical concerns, and as you’ve mentioned and Supervisor Ronen mentioned, a betrayal of the public trust,” Razzaq noted at the April meeting.

The Post noted that police officials at the meeting “struck a tone of contrition” over the leaking of the report.

Carmody declined through his attorney to comment on Scott’s statement. He has reportedly said he did not and does not pay for information or documents.

Why lawmakers tested positive for COVID-19 after Capitol riot, despite vaccinations
Vin Diesel marks 20 years of ‘The Fast and the Furious’
The inequities of PPP: Megachurches, large corporations receive money ahead of small businesses
Biden to pitch an eight-year pathway to citizenship in day one immigration reform bill
Dems aim to address Biden priorities as Senate returns with impeachment trial looming
Residents asked to shelter in place in parts of Poconos after multiple shootings