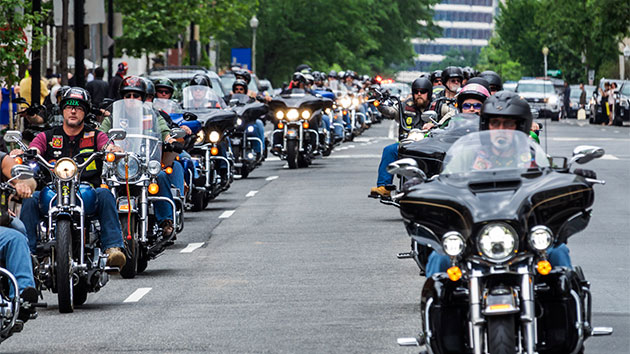 Jeffrey Greenberg/UIG via Getty Images
Posted on May 24, 2019 by ABC News

(NEW YORK) — “Ride for Freedom”, comes to a close this Memorial Day weekend, bringing to an end a 31-year tradition of Rolling Thunder veterans riding motorcycles through the streets of Washington D.C., according to the event’s organizers.

The spectacle started in 1988 and has gradually accumulated support – netting more than a half a million participants last year – and pays tribute to American veterans.

Former Army Sgt. Artie Muller, a 73-year-old Vietnam veteran and co-founder of Rolling Thunder, told the Military Times that costs have become too much to handle at the national level.

“It’s just a lot of money,” Muller said in an interview with the publication on the ending of the national ride.

Muller said harassment from Pentagon security and local police also played a role in the eradication of the ride.

Pentagon spokesperson Sue Gough pushed back on these claims in a statement to ABC News in December.

“The department supports the peaceful, lawful exercise of American citizens’ First Amendment rights, and remains focused on ensuring the safety and security of the demonstrators and the Pentagon Reservation,” Gough said. “The department is prepared to support the 2019 Rolling Thunder ride, as we have for the last 31 years.”

According to the group, Rolling Thunder began as a demonstration to raise awareness about those who served in Vietnam. Muller previously told ABC News that he hopes that supporters will become involved in the 90 Rolling Thunder state chapters across the country, which are starting their own 2020 Memorial Day Weekend demonstrations.

To kick off the weekend, the event will begin Friday evening with the “Blessing of the Bikes” at Washington National Cathedral. This is followed by a candlelight vigil at the Vietnam Veterans Memorial.

The final ride will be Sunday at noon followed by a speech from Veterans Affairs Secretary Robert Wilkie.

Paul Rudd brings cookies to voters waiting outside in the rain
Six indicted in connection to airport cargo heists totaling $6M in designer goods
Election 2020 live updates: With four days to go, Trump, Biden blitz Midwest
What to know before purchasing a fire pit this fall: Safety tips from experts
Boy with muscular dystrophy surprised with Halloween costume to fit his wheelchair
Veteran does 176,200 push-ups during blood cancer fight to honor others with disease