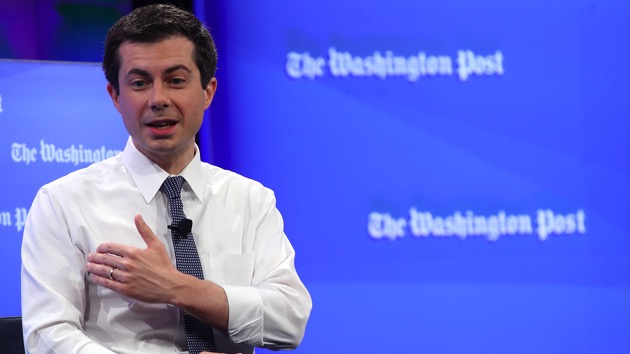 (WASHINGTON) —  Presidential candidate and war veteran Pete Buttigieg went after President Donald Trump over his medical deferment during the Vietnam War.”I don’t have a problem standing up to somebody who was, you know, working on season seven of Celebrity Apprentice when I was packing my bags for Afghanistan,” the South Bend, Ind., mayor said in wide-ranging discussion with the Washington Post’s Robert Costa on Thursday.Buttigieg added that he believed Trump used his status to fake a bone spur disability to avoid serving.”You believe he faked a disability?” Costa asked. “Do you believe he has a disability? Yeah. Yeah. At least not that one,” Buttigieg said, targeting the president in jest.He continued, “I don’t mean to trivialize disability, but I think that’s exactly what he did.”This is somebody who, I think it’s fairly obvious to most of us, took advantage of the fact that he was a child of a multimillionaire in order to pretend to be disabled, so that somebody could go to war in his place.”Trump was exempted from military service in the 1960s after receiving a letter from a doctor saying he had a bone spur ailment.”I asked for student deferment, like many other people during the war or around the time of the war. I had a minor medical deferment for feet, for a bone spur of the foot, which was minor,” Trump said in an interview with ABC News in July 2015. “I was not a fan of the Vietnam War. But I was entered into the draft, and I got a very, very high draft number.”  It’s not the first time someone has accused the president of faking his medical problem. The president’s former personal attorney, Michael Cohen, made a similar claim in his first public testimony to Congress in February.”Mr. Trump claimed it was because of a bone spur, but when I asked for medical records, he gave me none and said there was no surgery,” said Cohen.Cohen claimed the president told him, “You think I’m stupid, I wasn’t going to Vietnam.”

Michael Cohen says Trump asked him to handle fallout around Vietnam deferment. "Mr. Trump claimed it was because of a bone spur, but when I asked for medical records, he gave me none.""I find it ironic, Mr. President, that you are in Vietnam right now." https://t.co/VIaPPSRUMa pic.twitter.com/kLQk1EO4VU