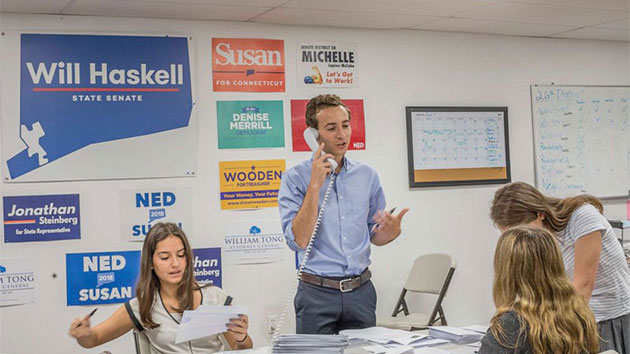 (HARTFORD, Conn.) — Candidates up and down tickets in the 2018 midterm elections were some of the most diverse in U.S. history — they were also the youngest. About 700 millennial candidates ran in roughly 6,000 state legislative races, according to the group Run for Something.

Will Haskell was one of those millennials who won.

“We need every generation to have a seat at the table,” he told ABC News’ “The Briefing Room.”

Haskell, a 22-year-old Democrat, was elected to Connecticut’s state senate in November when he beat incumbent Republican Toni Boucher who had been serving longer than Haskell had been alive.

“I’m certainly confused for an intern multiple times a week. But I’ll tell you, it’s already been so rewarding and I’m only a few months into my first term,” Haskell said.

Since getting sworn in this January, Haskell has focused on higher education and employment policy. Last month he introduced his first bill, designed to improve mental health prevention and treatment in higher education.

Haskell told ABC News, he was “starting with an issue that is really important to [him] and young people across Connecticut.”

The bill calls for a task force to study policies currently in place to prevent or treat students’ mental illnesses, and it passed the senate unanimously.

Each day that the senate is in session, Haskell drives an hour and a half from his hometown of Westport, Conn. in the 26th district to Hartford, Conn. His days are filled with media interviews, committee meetings and votes — and after that’s all through, he makes time for constituents.

“I learn every day from my colleagues who are older and who have been there for a long time. Some of them have been there longer than I’ve been alive. So one thing I get to bring into our caucus room is a knowledge of how to reach the next generation,” Haskell said.

Haskell says he hopes other young voters follow his lead and run for office.

“Bringing that perspective of the next generation is absolutely crucial and that is a big part of why I decided to run for office,” Haskell said.

Sarah Michelle Gellar wishes her ‘Buffy the Vampire Slayer’ character a happy 40th
“The ‘Bridgerton’ Effect”: Searches for “embroidery,” “corsets” and other finery skyrocket amid Netflix show’s success
“This isn’t going to be quiet”: Daniel Kaluuya recalls when ‘Black Panther’ went from being a movie to a “moment”
Peacock’s ‘Saved by the Bell’ revival gets sophomore season
The significance of the Bible Joe Biden is using on Inauguration Day
What happens inside the White House on Inauguration Day