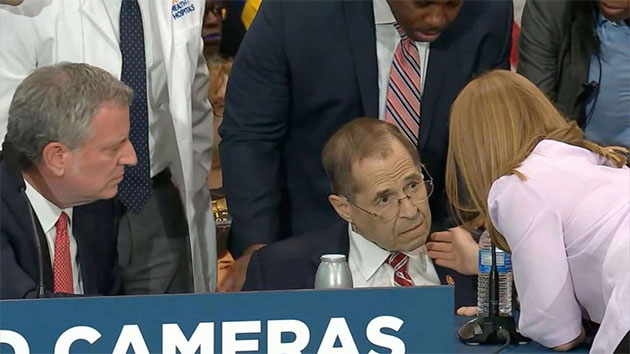 “He is okay. Seems to have been dehydrated and it was very warm in the room. He is now responsive and receiving a check-up,” a Nadler spokesman told ABC News.

The New York congressman, who’s 71, was at an event with New York Mayor Bill de Blasio when video showed him slumping in his chair.

Microphones picked up De Blasio saying to Nadler, “You’re looking dehydrated brother. You are looking a little dehydrated, you want a drink?”

Nadler later could be seen drinking water and eating an orange. The event, with signs saying “speed cameras save lives,” ended.

Not long after, he sent out a tweet saying he was “feeling much better.”

Appreciate everyone's concern. Was very warm in the room this morning, was obviously dehydrated and felt a bit ill. Glad to receive fluids and am feeling much better. Thank you for your thoughts.

Nadler has had an especially high profile and busy schedule as of late, doing political battle with the president and House Republicans and taking part in numerous television interviews.

President Trump has repeatedly attacked him, often mentioning their feud go back to their days in New York before Trump ran for president.