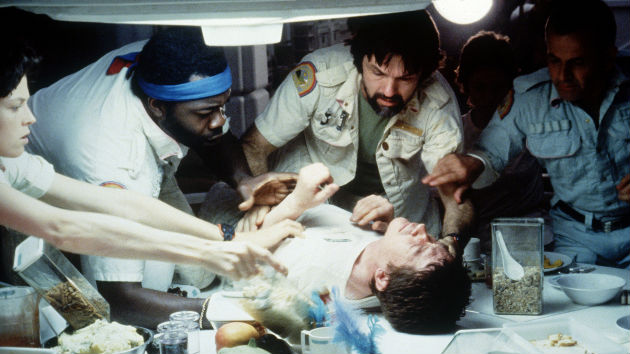 Photo by Sunset Boulevard/Corbis via Getty Images
Posted on May 24, 2019 by ABC News

The film, about a blue-collar crew aboard a deep space mining vessel who answer a distress call on a derelict planet and inadvertently bring aboard a killer alien, was a box office smash. It earned $80.9 million domestically — that’s nearly $285 million in 2019 dollars — against a budget of $11 million, and was the fifth-highest-grossing film of the year.

Alien also made an unlikely action star out of 29-year-old actress Sigourney Weaver.  Her portrayal of the steely, resourceful Ellen Ripley proved a woman could be an action hero, and set the stage for subsequent films featuring strong female leads, most recently Wonder Woman and Captain Marvel.  Weaver starred in Alien alongside Tom Skerritt, Harry Dean Stanton, Yaphet Kotto, Veronica Cartwright, Ian Holm and John Hurt — the latter of whom who unwillingly and fatally “birthed” the alien as it burst out of his chest in a shower of blood.  The surprise on the cast’s faces was real: they intentionally hadn’t been told specifically what to expect in the scene, which remains one of cinema’s most memorable.

The acid-bleeding alien quickly grows and eliminates the entire crew, save for Ripley.  In the end, she alone is left to kill the nearly indestructible beast.Alien spawned three sequels, including director James Cameron’s Aliens in 1986, as well as two spinoffs and two prequels, the most recent 2017’s Alien: Covenant.  Earlier this year, New Jersey’s North Bergen High School staged a charming DIY stage adaptation that drew praise from Ridley Scott and Sigourney Weaver herself, who even attended a performance.