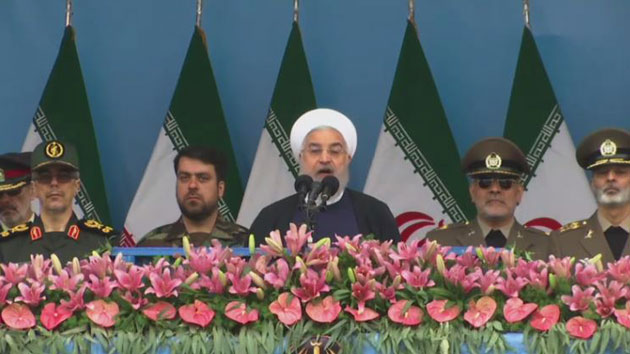 (WASHINGTON) — An additional 1,500 U.S. troops and increased defensive capabilities capabilities are being sent to the Middle East to continue to help deter Iran, a U.S. official said on Friday.President Donald Trump confirmed the 1,500 figure as he left the White House Friday afternoon as he left for a trip to Japan, calling it a “relatively small number.””We want to have protection,” he told reporters. “We’ll be sending a relatively small number of troops — mostly protective. Some very talented people are going to the Middle East, right now. We’ll see what happens.”“I don’t think Iran wants to fight,” he said.”And I certainly don’t think they want to fight with us. They cannot have nuclear weapons and under the Obama horrible agreement, they would have had nuclear weapons within five or six years. They can’t have nuclear weapons. They understand that,”The number of troops the president approved on Thursday is much smaller than the 5,000 to 10,000 requested by U.S. Central Command as part of the ongoing effort to deter Iranfrom attacking U.S. forces in the Middle East.The additional defensive capabilities requested by U.S. Central Command include additional Patriot anti-missile batteries, like the one already deployed to an unspecified location in the Middle East to deter Iran as well as reconnaissance aircraft and additional air and missile defense systems, said a separate U.S. official.Another U.S. official said some of the additional forces would be engineers who would “harden” structures for defensive purposes.On Thursday afternoon, acting Secretary of Defense Patrick Shanahan confirmed that the Pentagon would be asking for more forces, but would not confirm any numbers, saying that it was not 5,000 or 10,000 as was being reported..”What we are focused on now is do we have the right force protection in the Middle East?,” he told reporters outside the Pentagon.”What we’re looking at are there things we can do to enhance force protection in the Middle East,” he added.Shanahan acknowledged that such a request ” may involve sending additional troops.”On Thursday there was a White House meeting to consider the request from U.S. Central Command, according to two U.S. officials, who stressed that it was unclear which portions of the topline CENTCOM request could be approved at this White House meeting.A U.S. official told ABC News Wednesday that the defensive capabilities and weapons systems were being requested, and that the number of additional forces would depend on which capabilities are approved.The CENTCOM request has been in the works for some time, the U.S. official said.There are currently 60,000 to 80,000 U.S. troops serving in the Middle East including 14,000 in Afghanistan, 5,000 in Iraq, 2,000 in Syria, 10,000 in Kuwait, 10,000 in Qatar and thousands more at sea and elsewhere in the region.Secretary of State Mike Pompeo, acting Defense Secretary Patrick Shanahan and chairman of the Joint Chiefs of Staff Gen. Joseph Dunford briefed the House and Senate Tuesday on President Donald Trump’s Iran strategy, including recent intelligence of an increased Iranian threat and the U.S. reaction to it, the deployment of an aircraft carrier strike group and B-52 bombers and the ordered departure of non-emergency personnel from Iraq.After hearing from the officials, Democratic lawmakers expressed alarm over the administration’s posture in the Middle East and the possibility of a conflict with Iran.It’s possible that in the future additional U.S. Navy ships could be sent to the region beyond the USS Abraham Lincoln Strike Group and the USS Kearsarge Amphibious Group that are currently in the North Arabian Sea.But it’s unclear when additional ships could arrive in the region. Two weeks ago, the Pentagon announced that the USS Arlington would be headed to the Middle East to swap out with another ship, but that has yet to occur as the Arlington is currently in Spain.The new CENTCOM request for additional defensive capabilities and forces comes as Shanahan said on Tuesday that the threat of Iranian attacks against U.S. forces had been put “on hold.”U.S. officials said the Iranian threat to U.S. forces continues even as Iran has pulled back some weapons systems. Two U.S. officials said that Iran has removed cruise missiles from two civilian dhows that posed a risk to U.S. Navy ships, commercial ships and land targets. Copyright © 2019, ABC Radio. All rights reserved.