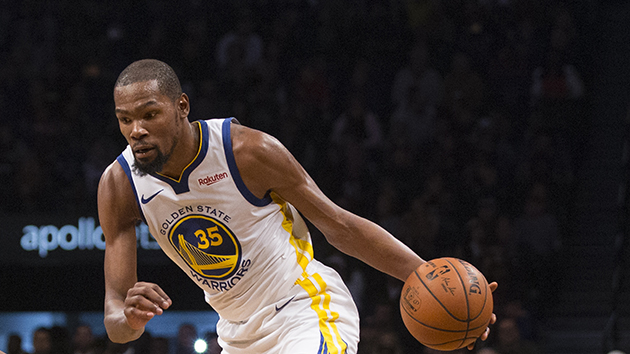 (OAKLAND, Calif.) — The Golden State Warriors announced on Thursday that Kevin Durant is “unlikely” to play in the first game of the NBA Finals with a calf strain.Durant suffered the injury in Game Five of the team’s second round playoff series against the Houston Rockets. The Warriors went on to win that series in six games, and swept the Portland Trail Blazers in the Western Conference Finals.The team remains hopeful that Durant could return at some point during the NBA Finals. They will face the winner of the Eastern Conference Finals between the Milwaukee Bucks and Toronto Raptors. That series is currently tied at two games apiece.Golden State also gave an update on center DeMarcus Cousins, who suffered a ruptured quad in their first round series. Cousins is expected to play “at some point” in the Finals.Copyright © 2019, ABC Radio. All rights reserved.