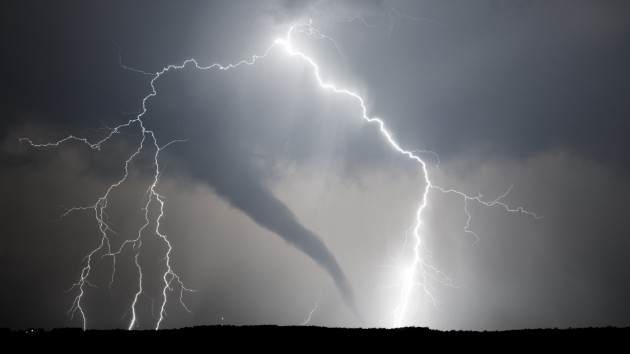 (JEFFERSON CITY, Mo.) — Three fatalities have been confirmed near Jefferson City after a “violent” tornado hit Missouri late Wednesday night and into the early hours of Thursday morning. Gov. Mike Parson confirmed the fatalities in a Thursday morning news conference, saying they “lived on the outskirts of Golden City,” which is about 170 miles southwest of Jefferson City, the state’s capital. “Those are the only three [fatalities] we know of at this time,” Parson said. “There’s nobody missing that we know of … that’s a good thing.””You never know what this weather is going to do,” Parson said. “We were very fortunate last night that we didn’t have more injuries than we did, and we’re very thankful that we didn’t have any more fatalities than we did,” he said.While there were three fatalities near Jefferson City Wednesday night into Thursday morning, at least seven people were killed in three states over the past two days due to the storms crossing the Plains. Four people died on Tuesday, including one woman killed after a tornado hit her home in Iowa. Two others died in a car accident in heavy rain near Springfield, Missouri, and one woman drove around a barricade and drowned in Oklahoma. Significant damage was also reported in Jefferson City, and 20 people in the area were transported to hospitals to treat injuries, though officials expected that the number of injuries could go up over the course of the morning.”There was a lot of debris flying, we had trees [flying],” said Jefferson City Police Department Lt. David Williams, describing what caused the injuries. “At this point, nothing in the serious [injury] declaration, as I’ve been told by emergency services.” Tornado sirens went off in the city, which has a population of about 42,000, at 11:10 p.m. on Wednesday, and the first damage in Cole County was reported at about 11:38 p.m., according to Williams. Williams also said they had received multiple calls of people trapped in their homes. “We realize that we still have a lot of things we have to do,” Williams said at a news conference Thursday morning.The National Weather Service office in St. Louis confirmed a “violent tornado” was on the ground in Jefferson City, telling people to “shelter now” at about 11:48 p.m. local time. Parson said that due to damage sustained by some state buildings in Jefferson City, only essential state employees are being asked to report for work Thursday, urging the others to stay at home. “We need to have people that are not affected stay out of the area,” Williams said at an earlier press conference. “Right now we have emergency personnel from all venues trying to get to the people that need our assistance the most and we can’t do that if there are citizens out trying to assess themselves and post on social media and other venues.”Williams also said they did not need volunteers to help at this time. Boone County Fire said it was sending its Missouri Task Force 1 — a group consisting of search-and-rescue assets, six search K-9s, two technical search managers, four structural engineers, one trauma surgeon and two medical specialists. Boone County is just north of Jefferson City.Missouri Department of Public Safety reported “extensive damage” in Jefferson City along “Ellis Boulevard near Highway 54.”