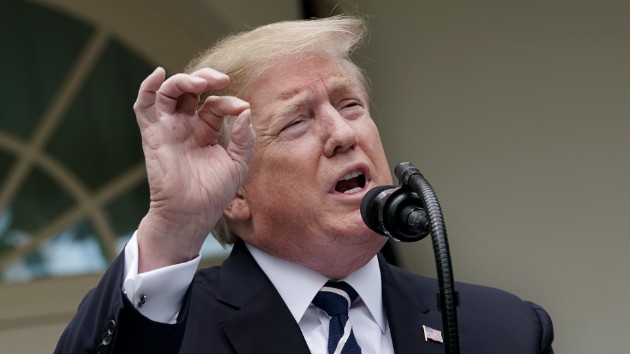 Chip Somodevilla/Getty Images
Posted on May 23, 2019 by ABC News

(WASHINGTON) — President Donald Trump on Wednesday again called his former secretary of state, Rex Tillerson, “dumb as a rock” in a tweet responding to what he said is a “made up story” about Russian President Vladimir Putin out-preparing him for a 2017 meeting in Hamburg, Germany.

Rex Tillerson, a man who is “dumb as a rock” and totally ill prepared and ill equipped to be Secretary of State, made up a story (he got fired) that I was out-prepared by Vladimir Putin at a meeting in Hamburg, Germany. I don’t think Putin would agree. Look how the U.S. is doing!

According to the Washington Post report, Tillerson told members of the House Foreign Affairs Committee that Putin “out-prepared” the president in a meeting that turned into a “a globe-spanning two-hour-plus session involving deliberations on a variety of geopolitical issues.” “We spent a lot of time in the conversation talking about how Putin seized every opportunity to push what he wanted,” a committee aide told the Washington Post. “There was a discrepancy in preparation, and it created an unequal footing.” Trump said he doesn’t believe Putin would agree with that account of their meeting. In an exclusive interview with ABC News, House Foreign Affairs Chairman Rep. Eliot Engel, D-N.Y, praised Tillerson after their closed-door meeting earlier this week, saying he found the former secretary of state to be “forthcoming” in his assessment of Trump’s handling of foreign policy and the inner workings of the administration’s foreign policy apparatus. Engel, along with ranking member Rep. Mike McCaul, R-Texas, met with Tillerson for an hour on Tuesday before Tillerson spent six hours fielding questions from the committee attorneys.“His telling to us of what life was like in that short year that he was secretary of State was very interesting,” Engel said in the ABC interview. “It just solidified my feeling that there was disorganization and that the president was not focused.”In a prepared statement to the committee, Tillerson said it was “no secret that President Trump and I disagreed” on some elements of foreign policy. “But at bottom, President Trump and I shared a common goal: to secure and advance America’s place in the world and to promote and protect American values.” The meeting was arranged through a mutual acquaintance, according to Engel. An aide said Tillerson later called the committee and expressed his willingness to talk. McCaul declined ABC News’ request to discuss the conversation with Tillerson.“My time in government is over, but I hope that my testimony today will help you as you continue to do the critical work of this Committee,” Tillerson said in the statement. On Wednesday, Engel said he hoped the conversation was the first of many between Tillerson and his panel on Capitol Hill. “I don’t know how much he has that he hasn’t told, but I suspect a great deal. And we’ll see,” the New York Democrat added. After a rocky partnership, Trump fired Tillerson on March 13, 2018 — announcing the decision in a tweet. Tillerson stayed on the job until March 31. Engel confirmed that he and Tillerson discussed what Engel called the “unusual circumstances” of the president’s family members — including the president’s adviser and son-in-law Jared Kushner “having the last say” on administration decisions. “He wasn’t there to bash the president,” Engel said of Tillerson, though he later added that the former secretary of State said Trump “was not the most proficient on foreign policy.” Before joining the Trump administration, Tillerson served as CEO of Exxon Mobil, the international oil and gas company. The committee and Tillerson also discussed Tillerson’s management of the State Department, according to the chairman. Engel and Democrats have raised concerns about the Trump administration targeting career officials over their perceived political affiliation. Engel was surprised that Tillerson defended his controversial proposal to reorganize the State Department, which was unpopular in Washington and among lawmakers of both parties on Capitol Hill. “I thought he might push it off on Trump, but he didn’t. He said it was his baby, and he defended it, because he thought it would work better if they redesigned it,” Engel said. Copyright © 2019, ABC Radio. All rights reserved.

A special Bond: Daniel Craig named honorary commander in the Royal Navy
Arrest warrant issued for Brian Laundrie in Wyoming as search presses on: Live updates
A century after arson decimated its Chinatown, San Jose to apologize for past racism and injustices
Jan. 6 select committee sends first subpoenas to former Trump aides, advisers
Billy Bob Thornton and Tania Raymonde on bringing ‘Goliath’ to a close with new fourth season
‘The Killing of Kenneth Chamberlain’ shines a light on racial injustice