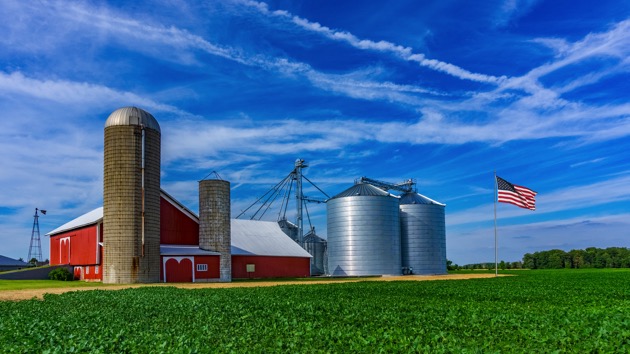 (WASHINGTON) — The Trump administration unveiled a $16 billion aid package for farmers hurt by the ongoing trade war with China, the second such deal intended to help limit the losses from Chinese tariffs on American goods.The assistance is designed to offset the estimated impact to American farmers from Chinese tariffs on American goods levied in retaliation for tariffs against Chinese products.Similar to the aid package announced last year, farmers can apply for direct payments for crops impacted by the tariffs and USDA will buy surplus products like milk and meat to distribute to food banks around the country. USDA says it will provide $14.5 billion in direct payments calculated based on the estimated impact to each country, as well as spend $1.4 billion to purchase goods and $100 million to develop other markets for U.S. goods.Agriculture Secretary Sonny Perdue said the money will come from tariffs against Chinese goods that go into the Treasury and then back into programs to distribute the money to farmers.”China is going to pay for these this 16 billion dollars through tariffs coming in a transfer coming in, and we are doing again through the (Civilian Conservation Corps) program which was authorized as we used last year,” Perdue said on Fox Business on Thursday morning. “But actually the tariff money that we are receiving the revenue we are receiving is what the president has intended to fund, the farmers who are being hurt by retaliatory tariffs.”

But countries don’t directly pay tariffs, economists say it’s more complicated and that the additional cost is more likely to be paid by American companies or consumers.The funds will ultimately come from the taxpayers because it is federal money that is being used for the bailouts, said Bill Reinsch, the Scholl Chair and senior adviser at the Center for Strategic and International Studies.”The reality becomes very very complicated, do the Chinese pay some of the tariff? Yes, probably in specific cases. Do they pay most of it? No, the consumer pays most of it ultimately,” Reinsch said.Perdue said the leadership in China is trying to make the trade dispute hurt Trump’s base the most and that they’re trying to outlast the Trump administration to get a better deal.”We feel like farmers have been hurt disproportionately, that China knows they’ve gone right at President Trump’s base politically to make farmers feel pain and he’s not letting them bear the brunt of that,” Perdue said.

Reinsch said that’s normal in a trade war where each country wants to hurt the other politically as well as economically.

“Trump has a bigger problem than most because a lot of their suffering right now is directly and clearly related to his policies, so it’s kind of on him to deal with that,” Reinsch told ABC News.

Groups that represent farmers like the American Farm Bureau and the National Farmers’ Union said that while they appreciate the assistance for farmers, it’s a short-term solution and they would rather have a long-term trade deal with China.

President Trump said on Monday he wanted an aid package that would help farmers do well and “make the same kind of money,” though USDA said the aid is intended more to help with additional costs such as storing excess product rather than make up for lost revenue.“We’re going to take the highest year, the biggest purchase that China has ever made with our farmers, which is about $15 billion, and do something reciprocal to our farmers so our farmers can do well. They’ll be planting. They’ll be able to sell for less, and they’ll make the same kind of money until such time as it’s all straightened out,” Trump said Monday.This would be the second time the Trump administration has provided aid to mitigate the impact to farmers losing money because of the escalating trade war with China.In 2018, the administration announced it would provide up to $12 billion in aid for farmers hurt by retaliatory tariffs from China through direct payments and purchasing billions of dollars of goods.On Thursday afternoon, President Trump spoke to reporters at the White House. “We will ensure our farmers get the relief they need and very, very quickly,” he said. “Good time to be a farmer, going to make sure of that.”