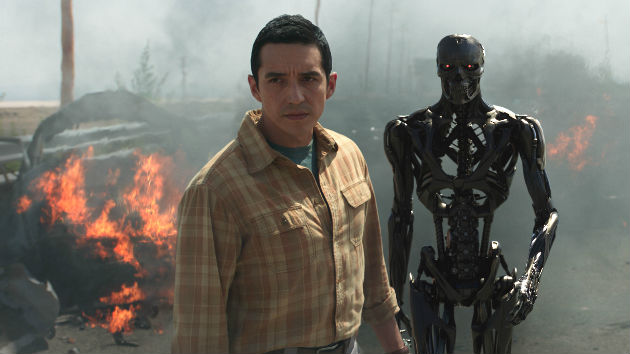 (LOS ANGELES) — Paramount has released the first trailer to Terminator: Dark Fate, the film that will reunite Arnold Schwarzenegger and Linda Hamilton for the first time since James Cameron’s 1991 blockbuster Terminator 2: Judgment Day.

Produced by Cameron and co-written and directed by Deadpool’s Tim Miller, the plot mirrors 1984’s original The Terminator: a savior is sent from the future to protect a young woman in the present from a futuristic killing machine sent by the machine-mind Skynet.

This time around, the Terminator in question, the Rev 9,  is played by Agents of S.H.I.E.L.D.’s Diego Luna, and his advanced model bears some of the “liquid metal” properties Robert Patrick’s T-1000 had in T2. The savior is Mackenzie Davis’ Grace; like Michael Biehn’s Kyle Reese in the original film, she’s a soldier sworn to protect her charge: unlike him, however, she’s a cyborg — though she apparently identifies as human.

As for the old guard: Linda Hamilton’s introduction in the preview is as kick-butt as fans might hope: as Luna’s Terminator closes in on his target, Natalia Reyes’ Dani Ramos, Hamilton’s Sarah Connor emerges, blasting it with a shotgun — and then an RPG.

Before you can say “Come with me if you want to live,” Connor teams up with Grace, and, of course, the old reliable T-800; Arnold’s visibly aged Terminator model.

“Why do you care what happens to her?” Grace asks Connor. “Because I was her,” she answers, implying that Ramos’ future is key to humanity’s survival, just as Sarah’s was.

As you might expect, there’s no shortage of action, including a pair of huge military planes ramming into each other, and an underwater Terminator vs. Terminator fight.