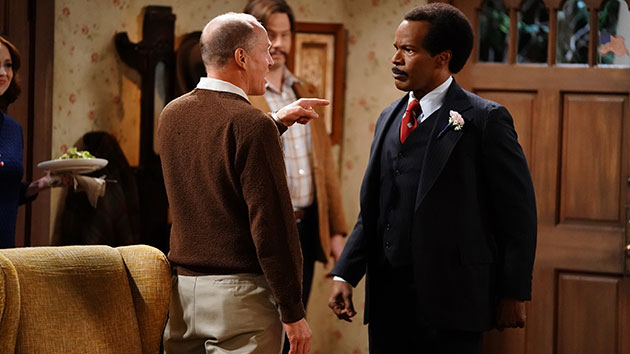 (LOS ANGELES) — It was the 1970s all over again, as Jimmy Kimmel and legendary TV show creator Norman Lear teamed up for Live in Front of a Studio Audience: Norman Lear’s All in the Family and The Jeffersons, which featured live performances from classic episodes of All In The Family and its spin-off, The Jeffersons.

While the entire all-star cast shined in their roles, It was Jamie Foxx’s spot-on George Jefferson, originated by the late Sherman Hemsley, that stole the show.

During the All in the Family episode “Henry’s Farewell,” Foxx flubbed one of his lines. Breaking character, the Oscar-winning actor reminded the audience “It’s live!” Added Foxx, “Everyone sitting at home just thinks their TV just messed up.”

The ad-lib drew laughter and cheers from the audience, and even had his fellow cast members — Woody Harrelson as Archie Bunker, Ellie Kemper as Gloria, Ike Barinholtz as “Meathead”, Anthony Anderson as Henry Jefferson and Marisa Tomei as Edith Bunker — cracking up in the background.

Jennifer Hudson provided one of the show’s other highlights, performing the iconic Jefferson’s theme song “Movin’ on Up.”

Lear opened the special by noting, “the language and themes from almost 50 years ago can still be jarring today and we are still grappling with many of those issues.”

One sign of the times came during The Jeffersons segment when the N word was bleeped several times.