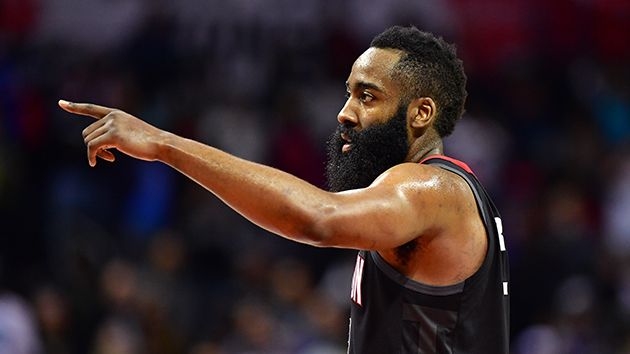 (NEW YORK) — Two of the three finalists for this year’s NBA MVP award — Giannis Antetokounmpo of the Milwaukee Bucks and James Harden of the Houston Rockets — were unanimous selections for the league’s All-NBA First Team, the NBA announced Thursday. Joining the pair on the first team were Golden State Warriors guard Stephen Curry, Oklahoma City Thunder forward Paul George, and Denver Nuggets center Nikola Jokić. By making his second consecutive All-NBA team, Antetokoumpo made himself eligible to receive the largest contract in NBA history next summer. The Bucks will be able to offer him a five-year contract worth $247.3 million, according to ESPN’s Bobby Marks. Antetokounmpo would still be one year away from free agency.It also marks the first time in 11 years that LeBron James was not chosen to the All-NBA First Team. He was named to the third team — extending his streak of consecutive selections to 15 years. There were additional salary implications riding on the selections this year, with four players needing to be chosen to be eligible for a designated veteran extension — also known as the “supermax” — this offseason. Portland’s Damian Lillard and Charlotte’s Kemba Walker each qualified for that deal, while the Washington Wizards’ Bradley Beal and Golden State’s Klay Thompson did not.Copyright © 2019, ABC Radio. All rights reserved.