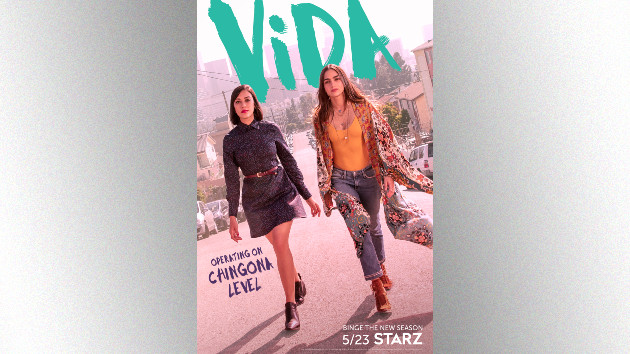 (NEW YORK) — The second season of Vida starts off with a bang… literally.

Melissa Barrera and Mishel Prada, who play sisters Lyn and Emma on the GLAAD-award winning Starz series, want to warn viewers that the first episode is definitely NSFW.

“Warning: The first like minute-and-a-half of season two, you probably shouldn’t watch around kids or at work or anything of the sort,” Barrera tells ABC Radio.

Prada adds, laughing, “Or older people with heart issues. Anything that might cause a scare.”

“Yeah, it starts with a bang,” Barrera says.

The show is known for its groundbreaking Latinx and LGBTQ representation, as well as depicting sexuality in bold new ways. Prada says she actually got a virus on her computer while googling “research” for a sex scene. So how do their families feel about some of the more explicit scenes?

“It’s funny because I usually don’t say anything and I let them discover it and then we don’t talk about it,” Barrera says. “It’s a very Mexican thing to do. You just gloss over any uncomfortable, awkward conversations.”

At its core, though, Vida is a show about family. This season will explore the formerly estranged sisters as they attempt to build a future as business partners and co-owners of their late mother’s bar.

Season two is available to stream on the Starz app in its entirety starting today and will debut on Starz Sunday at 9 p.m. ET/PT.