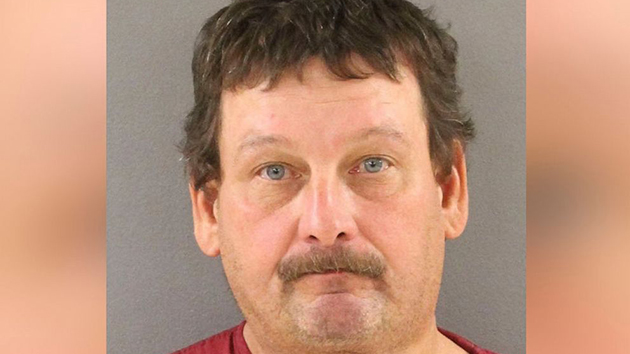 (KNOXVILLE, Tenn.) — A man is in custody for the 1986 murder of a Florida woman and authorities say the suspect lived less than 1 mile away from the victim at the time.Danny Lynn Emitt, 50, of Knoxville, Tennessee, was arrested Wednesday for the murder of 38-year-old Eveline Aguilar, according to the Seminole County Sheriff’s Office.Three of Aguilar’s four sisters gathered to watch Seminole County Sheriff Dennis Lemma announce the arrest on Thursday.Aguilar’s body, covered in stab and cut wounds, was found in her apartment on July 14, 1986, said the sheriff’s office.Lemma described it as a “brutal homicide and sexual battery.”But no suspect was initially identified and the case went cold, the sheriff said.Lemma said the case was most recently re-opened in May 2018 and semen from the crime scene was resubmitted to the Combined DNA Index System — the law enforcement database known as CODIS.The semen sample matched a DNA sample Emitt had voluntarily submitted in 2005 in connection with a Melbourne, Florida, case, the sheriff’s office said. Emitt was not arrested in the Melbourne case, authorities said.Emitt’s palm print was also found on a window sill at the crime scene, said authorities. A window pane was smashed to gain entry to the apartment, Lemma said.Emitt lived about half a mile away from Aguilar’s apartment at the time of the crime, said Lemma. He had never been a suspect in the case.Emitt has lived a “crime-ridden” life with over 30 arrests, said Lemma.He was booked at the Roger D. Wilson Detention Facility in Tennessee on charges of first-degree premeditated murder and burglary, according to the sheriff’s office. He is expected to be extradited to Florida for a first court appearance but a date has not been set, the sheriff’s office said.Copyright © 2019, ABC Radio. All rights reserved.