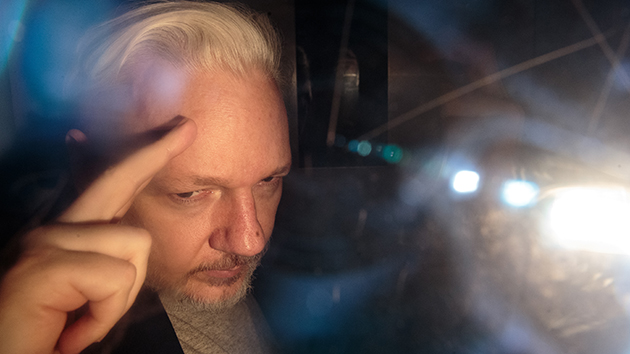 Photo by Jack Taylor/Getty Images
Posted on May 23, 2019 by ABC News

(WASHINGTON) — Julian Assange was charged Thursday in an 18-count superseding indictment for his role in orchestrating the 2010 WikiLeaks disclosures, described by the U.S. government as “one of the largest compromises of classified information in the history of the United States.”According to the Justice Department, the new charges from a federal grand jury in the Eastern District of Virginia allege that “Assange’s actions risked serious harm to United States national security to the benefit of our adversaries.”

Reacting to the indictment Thursday, Assange’s attorney in Washington Barry Pollack said Assange was being charged “for encouraging sources to provide him truthful information and for publishing that information.”

“The fig leaf that this is merely about alleged computer hacking has been removed,” Pollack said. “These unprecedented charges demonstrate the gravity of the threat the criminal prosecution of Julian Assange poses to all journalists in their endeavor to inform the public about actions that have taken by the U.S. government.”

According to the DOJ announcement, Assange faces a maximum penalty of 10 years in prison on each charge with the exception of one charge related to conspiracy to commit computer intrusion.Assange was previously indicted in April on a single-count conspiracy to commit computer intrusion charge for his role in Chelsea Manning’s disclosure of classified materials made public by WikiLeaks in 2010, which the government has called “one of the largest compromises of classified information in the history of the United States.”Legal experts at the time said that indictment could be a placeholder in lieu of more extensive charges that could be pursued at a later date. It was also interpreted as the government attempting to dodge potential First Amendment issues by not addressing Assange’s self-proclaimed status as a publisher.One of the counts includes a charge of conspiracy between Manning and Assange to obtain receive and disclose national defense information in violation of the Espionage Act, a rare move for a person who never served inside government.”The Department takes seriously the role of journalists and our democracy and we support it,” Assistant Attorney General for National Security John Demers told reporters Thursday. “It has not and never been the Department’s policy to target them for reporting. Julian Assange is no journalist, this is made plain by the totality of his conduct as alleged in the indictment.The superseding indictment comes just one week after Manning, a former U.S. Army intelligence analyst and anti-secrecy activist, was ordered back to jail after a federal judge held her in contempt of court for defying a grand jury subpoena. That grand jury is convened at the same federal court where prosecutors filed their charges against Assange.The indictment specifically addresses Assange’s exchanges with Manning, alleging that “after agreeing to receiving classified documents from Manning and aiding, abetting, and causing Manning to provide classified documents,” Assange then published those documents on WikiLeaks — an act they say put confidential sources used by the U.S. government abroad in potential danger.Assange is currently serving a 50-week jail sentence in Great Britain for skipping bail and is fighting extradition to the United States. Copyright © 2019, ABC Radio. All rights reserved.

‘There is no plan B’ for Tokyo Olympics, IOC chief says
1,900 doses of Moderna vaccine destroyed after cleaner unplugs freezer in Boston
Coronavirus live updates: New cases, deaths in US down week-to-week
Columbus to invest nearly $5M in police bodycams after Andre Hill shooting
Clare Crawley breaks her silence on split from Dale Moss: “This was not what I expected or hoped for”
Priyanka Chopra Jonas says the racism she suffered in high school forced her to leave America