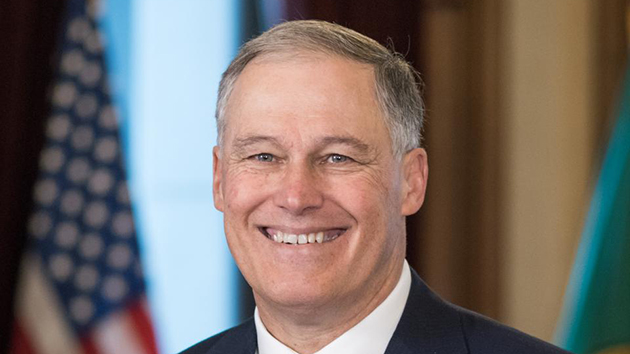 Office of Governor Jay Inslee
Posted on May 23, 2019 by ABC News

(NEW YORK) — The rising tide of 2020 Democratic presidential hopefuls calling for environmental reform now includes Gov. Jay Inslee of Washington, a politician who has made climate change the crux of his campaign.Inslee unveiled his initiative, dubbed the “100% Clean Energy for America Plan,” on Friday morning. The proposal’s scope is sweeping — laying out 100% clean energy standards across three sectors: electricity, new vehicles and the construction of new buildings.The plan would meet, and even exceed the Intergovernmental Panel on Climate Change targets for carbon reduction — which say that carbon dioxide emissions must be reduced by 45 percent by 2030, reaching near-zero by 2050. The policy rollout ties together the overarching thesis of Inslee’s campaign — allying the fight against climate change with national security, health care and the economy.”The course of inaction is the course of economic disaster,” Inslee said ahead of the plan’s rollout.His aggressive proposals on climate change come as the party’s progressive wing, bolstered by young voters, has continued to call for candidates to take a more aggressive approach. Democrats continue to debate the best way to combat climate change, an issue that is poised to take on a greater level of importance this cycle than any the party has held in years past.A recent poll conducted by Harvard Institute of Politics of young people, ages 18 to 29, found a substantial 14-point increase from the same poll they conducted in 2015 in those that say they believe “government should do more to curb climate change, even at the expense of economic growth.”Experts agree.”This is the first time in our history climate change is going to be a voting issue, and a top theme of election 2020,” said Dana R. Fisher, a professor whose work centers on understanding the relationship between environmentalism and democracy, most recently studying activism and American climate politics. “There’s such momentum amongst active and progressive young Americans — they’re probably the most engaged electorate right now — because the news just keeps getting worse and worse, and the American public is listening and going to put pressure on their candidates. They’re shining a light on this, and there’s momentum for candidates to speak about the issue.”If elected, Inslee’s proposal begins on day one of his administration. Then, spanning over 10 years, it aims by 2030 to reach 100% zero emissions from new vehicles; zero carbon pollution from all new commercial and residential buildings; and would require 100% carbon-neutral power across the country. By 2035, it proposes completely clean, renewable and zero-emission energy nationwide.Inslee says he will aim to make sure coal industry workers, their families and their communities don’t fall through the cracks. That means as the nation transitions — extra training for new clean energy jobs, education and assurance of opportunities in a clean energy economy.”These folks who have worked in the coal industry are deserving of incredible respect and dignity,” Inslee told ABC News. “They are people whose contributions of multiple generations have literally built the economy of the United States, people who are doing really hard work, and are deserving of our respect and what we’ve done in the state of Washington — which is to make sure that as we go through this transition, that we also make sure we are caring for and embracing these communities to make sure they have a future as well.”He seeks to accomplish his plan’s goals through tax incentives for using clean technologies and more renewable energy in electricity delivery, vehicle manufacturing and construction of new buildings; deploying natural resources — wind and solar — on public lands; implementing a new standard for clean cars; and promoting alternative fuels.Inslee is no newcomer to such efforts. His model draws from measures he’s undertaken with success in his own state, experts said.”Gov. Inslee has been a leading advocate for transitioning America to clean, renewable energy for decades. This is not a new-found passion of his,” said Mark Jacobson, a climate expert and Stanford University professor, who described Inslee’s initiatives as “feasible, bold, and necessary first steps.”His plan also received praise from another governor-turned-presidential contender, California’s Jerry Brown, who issued a challenge to other candidates in the race to prioritize the issue of climate change.”I commend Governor Inslee for presenting a bold climate action plan. It is time for the other candidates to also confront global warming and the profound threat it constitutes for America, and yes, for the entire world. Time is running out.” Brown said in statement provided to ABC News on Friday.Still, Inslee’s plan would require mammoth mobilization by the federal government.Inslee’s team likens the initiative to President John F. Kennedy’s “Moonshot.” That famous tagline came as America embarked on efforts to conquer the final frontier of space and reach the moon. It is a fitting characterization that seems to anticipate, as there was then, public disquiet about the cost and value of such radical efforts. Democrats addressing the new climate fight through eliminating coal power and retiring its plants, have in the past run the risk of alienating Rust Belt constituents.