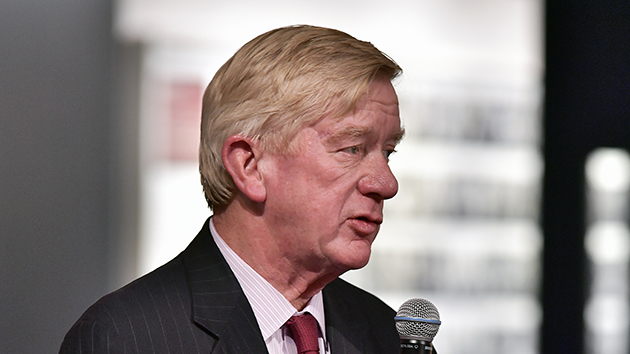 Photo by Paul Marotta/Getty Images
Posted on May 23, 2019 by ABC News

(NEW YORK) — President Donald Trump’s lone Republican primary challenger, former Massachusetts Gov. Bill Weld, ratcheted up his attacks on the president Tuesday night.Speaking at the first in a series of Kennedy Institute events focused on the 2020 election cycle, Weld levied a number of his harshest verbal jabs yet, saying earlier this week that the president preferred an “Aryan nation.””I celebrate that America has always been a melting pot,” Weld said at the speaking event on Tuesday. “It seems he would prefer an Aryan nation.”According to the Anti-Defamation League, “Aryan Nations is a longstanding neo-Nazi group in the United States that dates back to the 1970s.”When asked to explain what specifically he meant by “Aryan nation,” Weld told ABC News that he believes the president “would prefer a nation with no immigrants.”The comment, which appeared to be a step further than Weld had gone with past attacks aimed at the president, even elicited a justification from the long-shot candidate himself. “I know that sounds strong and tough but he’s very interested in bloodlines and it has resonance,” the former governor argued.While Weld was reluctant to talk specifics regarding his claim that the president would “prefer an Aryan nation,” he argued that his recent uptick of attacks on Trump had more to do with the direction the president is going than simply a change in strategy.”It’s not just that I’m feeling more like going on the attack, it’s also that the president is moving to a deeper level of irresponsibility,” Weld told ABC News.President Trump does have a history of talking about “good genes” and “bloodlines.” In a 2016 speech, Trump praised his uncle Dr. John Trump, a nuclear physicist who worked at MIT, for having “good genes, very good genes.” And according to Business Insider, the president complimented guests on their “great bloodlines” at a 2018 black-tie business event in Oxfordshire, Britain.Trump was also criticized early on in his presidency for saying there were “very fine people on both sides” of the clashes at the 2017 “Unite the Right” white supremacist rally in Charlottesville, Virginia.However, the president has vehemently denied allegations that he’s racist, and has maintained that he is the “least racist person” reporters “have ever interviewed.”The Trump campaign did not respond to ABC News’ request for comment.Weld also weighed in on Wednesday’s extraordinary scene at the White House after the president reportedly walked out of a meeting with top Democratic leaders, calling the move “dangerous to the country.””You know when he walked out of that meeting with [Chuck] Schumer and [Nancy] Pelosi, he essentially said he’s not going to corporate with them on anything. Well, that’s not how the constitution works,” Weld told ABC News. “He is so far beyond what anything President Nixon ever did.”Weld, who hasn’t been necessarily shy about taking Trump on since getting into the race earlier this year, also took a veiled swipe at the president over past allegations of mistreatment of women during his event on Tuesday.”One of the great differences between me and Mr. Trump is that I’ve always treated women with respect. I’ll leave it at that,” the former Republican governor said.The president has vehemently denied all the accusations made by at least 16 women.”They are all false, they are totally invented, fiction. All 100 percent totally and completely fabricated,” Trump said back in 2016.And during the former governor’s appearance at the Kennedy Institute event, Weld also made it clear he had no tug to run as a Democrat.”No, I’m running as an ‘R’ all the way,” Weld said when asked about a possible Libertarian run in the general election. He appeared on that party’s ticket in 2016 as vice president. “I won’t try to start a third party and I won’t go back and run in any existing third party. I’m running as an ‘R’ and if that doesn’t work then I’m done.”Weld is running against history in the primary, as no modern primary challenger has successfully knocked off a sitting president. And this time around, the Republican National Committee remains in lock step with the president’s campaign.Copyright © 2019, ABC Radio. All rights reserved.