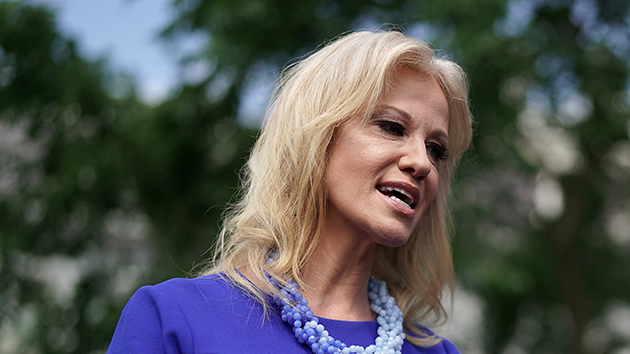 Photo by Chip Somodevilla/Getty Images
Posted on May 23, 2019 by ABC News

(WASHINGTON) — The tension at Wednesday’s failed meeting between President Donald Trump and top Democrats didn’t end when he abruptly left the room.

House Speaker Nancy Pelosi and one of the president’s top aides, Counselor Kellyanne Conway, also had a terse exchange.

After the president left the Cabinet Room after just three minutes without shaking hands or allowing anyone else an opportunity to speak, Conway said she challenged Pelosi to respond to the president’s complaints to members of the president’s Cabinet and senior staff still in the room.Speaking to reporters on Thursday at the White House, Conway said Pelosi treated her “as she might treat her maid” in declining to have further discussion.“Respectfully, Madame Speaker, would you like to address the specific points the president raised?” Conway said she asked Pelosi after the president left without ever sitting down or shaking hands with anyone.“And she did what she does all the time,” Conway said, making a dismissive hand gesture as if to mimic Pelosi and said the speaker told her: “I talk to the president, not to staff.””Gee, that’s so pro-woman of you,” Conway said she then told Pelosi.Conway continued: “Because, after all, she thinks we’re all staff. I think she’s the sixth or so richest member of Congress and behaves that way. She treats me as she might treat her maid, or her pilots, or her makeup artist, or her wardrobe consultants.”Pelosi, asked to respond Thursday to Conway’s account of their exchange, said she had no interest in talking about Conway but again reiterated that she deals with the president directly.“I’m not going to talk to her, I responded as the Speaker of the House to the President of the United States. Other conversations people want to have among themselves is up to them,” Pelosi said.Conway also on Thursday sought to further counter the narrative that the president was raging in his meeting with Democrats, contending that the president walked away “very calmly.”“My point was the president spoke for three minutes and was very specific about why he’s turning around and walking away very calmly,” Conway said. “She didn’t address any of that.”The president also took to Twitter on Thursday to directly bat back against the characterization that he was hot-headed in his meeting with Democrats.Immediately following his short-lived meeting with Democrats on Wednesday, the clearly frustrated president then went before cameras in the Rose Garden in a hastily-arranged press availability, where vented that Democrats had accused him of a “cover-up” and vowed not work with Democrats on legislative priorities until they stop investigating him.Conway also said Pelosi, though she didn’t want to have a conservation with her, did go on a tangent about Thomas Jefferson and Teddy Roosevelt.“Everybody let her finish, no idea what that was about and then I just filled the air,” Conway said. “That was all she said and then she stormed out.” Copyright © 2019, ABC Radio. All rights reserved.