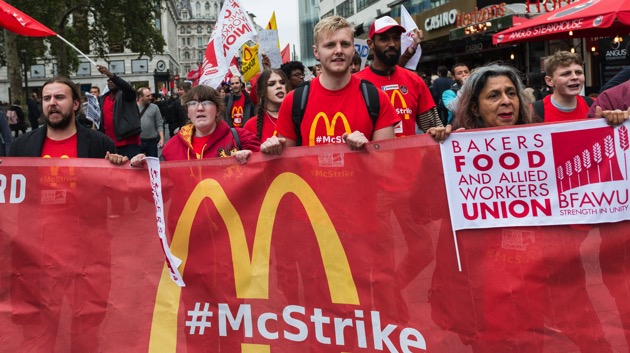 Wiktor Szymanowicz / Barcroft Media via Getty Images
Posted on May 23, 2019 by ABC News

(NEW YORK) — Striking workers for fast food giant McDonald’s joined a handful of Democratic presidential candidates on Thursday in their push to expand union rights and raise the minimum wage to $15 an hour.The strike coincides with McDonald’s annual shareholder meeting in Dallas, Texas. McDonald’s cooks and cashiers are striking in major cities around the country including Chicago, Detroit, Houston, Kansas City, Los Angeles, Miami, Milwaukee, Orlando, St. Louis and Tampa.Former Housing and Urban Development Julián Castro, New York City Mayor Bill de Blasio, Washington Governor Jay Inslee and Sen. Bernie Sanders are joining and hosting various events around the country to support McDonald’s employees and cast themselves as the true defender of workers’ rights amidst a crowded Democratic primary field. More broadly, 2020 Democrats are courting organized labor as the unions bide their time on endorsements – which will be crucial to clinching the Democratic nomination.Sanders, who had to remain in Washington, D.C. in order to vote for an upcoming disaster relief bill, joined striking workers via a live town hall and touted legislation that he would prioritize as President to raise the minimum wage and protect workers.Last year, Sanders wrote a letter to McDonald’s CEO Steve Easterbrook urging him to raise the minimum wage and respect the right of his workers to form a union.“Today, we live in the wealthiest country in the history of the world. But tens of millions of workers don’t know that, because they’re working longer hours for low wages,” Sanders said during the town hall. “Does anybody think that that is moral, or that is right?”Asked by a Fight for $15 advocate how he would make sure McDonald’s workers have a seat at the table when negotiating with the company, Sanders praised companies that are partially owned by its workers. He added that America “has a lot to learn from countries like Germany” where in some cases 40 percent of the boards that control companies are composed of workers.“Let me tell you, if 40 percent of McDonald’s board was composed not of CEOs of other large corporations, but of working people trust me, you would be making today at least $15 an hour. There would be vigorous efforts to protect workers from sexual harassment and violence because workers would be reflecting the needs not just of stockholders who want stock buybacks, but representing the needs of workers who want decent wages and decent working conditions,” he said.McDonald’s says that most of its restaurants pay more than $10 an hour.“McDonald’s Corporation does not control the wages franchisees pay in their own restaurants. The average starting wage at corporate-owned restaurants exceeds $10 per hour, and we believe the average starting wage offered by those independent business owners is likely similar,” Lauren Altmin, a spokesperson for McDonald’s told ABC News in a statement. “Separately, McDonald’s recognizes the rights under the law of individual employees to choose to join – or choose not to join – labor organizations.”Castro, whose campaign, along with Sanders, is unionized, joined striking workers in Durham, N.C. to decry companies like McDonald’s for not paying their workers a living wage.

I’m proud to march alongside @McDonalds workers in Durham, NC this morning striking for fairer wages, better conditions, and the right to unionize. I’m going to join workers anywhere they’re fighting for a living wage and safe working conditions. pic.twitter.com/Lox3bhq7dt

“Companies across the United States are making more and more profit without passing that down to the people who made that profit for them,” Castro said. “We’re here today to tell McDonald’s that it’s not acceptable to pay your workers a wage you can’t live on.”Inslee joined striking workers in Chicago Thursday afternoon, while de Blasio, the latest Democrat to enter the 2020 race, attended an event later Thursday in Des Moines, Iowa.”Today, I’m proud to be on the strike line with McDonald’s workers in Chicago as they demand the right to a union, safe working conditions, and fair pay. Because that’s what every one of us deserves. #FightFor15,” Inslee tweeted from the picket lines.”I think it’s so critically important at a moment like this, when presidential politics is heating up and all of us have an opportunity to stand for workers, that we support the workers who are coming together to fight for a union and a fair wage,” Buttigieg said in a video posted on Twitter.”Today, I stand in solidarity with McDonald’s workers and all Americans who work day in and day out to provide a better life for their families,” Gillibrand wrote in an op-ed in the Dallas Morning News. “Thank you to the union organizers supporting these workers. Thank you to the workers who were brave enough to tell their stories. I see you, I hear you, and I’m ready to fight with you.”Copyright © 2019, ABC Radio. All rights reserved.