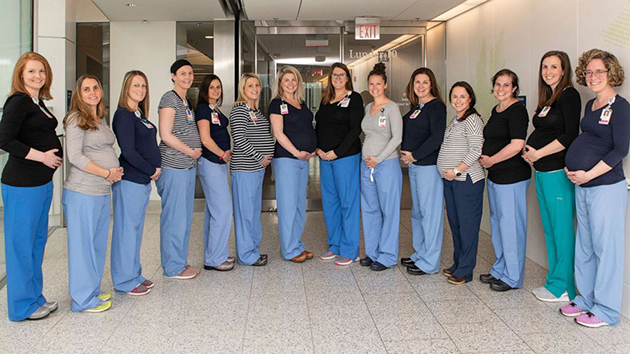 (BOSTON) — Over the past few months, 14 nurses have come into the office of Ellen Fitzgerald, director of nursing in an oncology unit at Massachusetts General Hospital.Each nurse has told Fitzgerald the same thing: “I am pregnant.”The 14 nurses in the unit, which treats leukemia and bone marrow patients, are all expecting between now and November. That is on top of four nurses in the unit who have already given birth this year.While the prospect of planning for 18 maternity leaves at once may sound overwhelming, Fitzgerald said the seriousness of the illnesses they treat in their oncology unit puts it all in perspective.“I don’t know that you can be anything but joyful about bringing life into the world,” Fitzgerald said. “We will take care of our patients and our nurses.”Fitzgerald said she created a spreadsheet to track the nurses’ schedules and that she plans to turn a room in the unit into a lactation room so that her nurses can pump peacefully.

For the pregnant nurses, all in their 30s, being pregnant at the same time has been a bonding experience for the already close coworkers.“It’s a blessing because I feel so supported by my manager and colleagues who have become my close friends,” said Kathleen Chivers, who is due in September with a girl. “I feel so lucky.”The nurses said they are supporting each other in ways big and small, from sharing advice to maternity clothes and staying stocked with snacks for whoever needs one at any moment.“We do serious work but we have a lot of fun together and are very close,” said Sally Alexander, who is due in June. “We’re very supportive of each other on a day-to-day basis and now even more so when people may need a little help because they can’t walk as fast.”

Chelsey Johnson is expecting her first child — a boy — next month. She spoke for the first-time moms-to-be in the group who are relying on their coworkers for advice.“Being pregnant is a really a wild ride and you don’t know what to expect and there’s been 13 other people to ask,” she said, describing the experience as “happy” and “reassuring.”While it is easy to imagine there being a reason beyond coincidence for how groups of women like the ones at Massachussetts General get pregnant at the same time, doctors say there isn’t one.”More likely, I think it’s people who are around the same age, going through the same thing and they see people getting pregnant and being able to handle it,” Dr. Joanne Stone, director of maternal-fetal medicine at Mt. Sinai Hospital, told Good Morning America last month. “It’s more of an atmospheric thing than there’s any medical reason for it.”The nurses plan to take an average of 12 weeks maternity leave. Fitzgerald said that for the first time in her career she has over-hired for her unit.”I will be over budget and the hospital supports that because we have to have coverage,” she said. “It’s just causing smiles around here. We know we will absolutely get through this.”Another nurse, Caroline Arriggi, surprised the group further when she announced that she is pregnant with twins. She is already planning for a photo shoot in November with all 19 of the unit’s babies.The coworkers said they are also planning future play dates with their children. They also wouldn’t be surprised if there are more pregnancy announcements to come.When asked what the last due date is for the group of 14 pregnant nurses, they replied, “November,” and then quickly added nearly in unison, “That we know of.””A lot of us are in that core age bracket where people are having their first child or have one baby and are planning for another,” Ariggi said. “I think Ellen [Fitzgerald] just has to get used to all these pregnancies all the time.” Copyright © 2019, ABC Radio. All rights reserved.