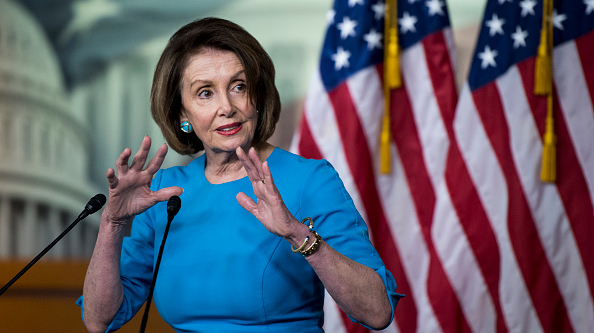 Bill Clark/CQ Roll Call via Getty Images
Posted on May 22, 2019 by ABC News

(WASHINGTON) — House Speaker Nancy Pelosi, facing a revolt from members of her caucus, has been compelled to hold an closed-door meeting Wednesday morning to deal with new pressure to go forward with an impeachment inquiry of President Donald Trump.Despite a growing number of Democrats tired of delay and calling for action, Pelosi on Tuesday continued to try to deflect the reality that her caucus is beginning to shift toward impeachment, telling ABC News, “No,” when asked if she was under increased pressure to impeach Trump.”We don’t have division,” she told reporters.But after Trump blocked former White House counsel Don McGahn from testifying Tuesday, one after the other, several Democrats publicly bucked Pelosi.Rep. Mark Pocan, a co-chair of the Congressional Progressive Caucus, said Trump’s “stonewalling” of Congress “only enhances the President’s appearance of guilt,” and “has pushed Congress to a point where we must start an impeachment inquiry.””Regrettably, the President’s most recent actions and continued disrespect for the Constitution are forcing us down the road to impeachment,” Pocan, D-Wisc., said. “The President and his associates are engaging in a campaign of obstruction and lawlessness that undermines the rule of law and does not reflect the actions of someone who is ‘exonerated’ as innocent. Congress has a responsibility to conduct oversight and get the information we need to deliver the truth to the American public regarding Russia’s interference in our elections.””I think impeachment, what’s also tough about this conversation is when we say impeachment a lot of people don’t know what that process means in the House,” Rep. Alexandria Ocasio-Cortez, D-N.Y, said. “I think that right now what we need to do is at least be on that track and at least be in the process of impeachment.”For months, Pelosi has attempted to keep her caucus in line, urging them to withhold calls for impeachment in order to focus on the Democrats’ legislative agenda. She has openly downplayed the prospects of successfully impeaching Trump, given the lack of bipartisan support for impeachment and a Republican firewall in the Senate.But after Michigan Republican Rep. Justin Amash broke ranks with his GOP colleagues and said he believes President Trump “engaged in impeachable conduct,” some Democrats believe Pelosi is running out of excuses.Texas Democratic Rep. Sheila Jackson Lee said she will introduce a “Resolution of Investigation” this week, asking the full House of Representatives to authorize an investigation intended to determine whether impeachment powers should be exercised.”What the American people want and deserve is deliberate and judicious action by the United States Congress,” she tweeted. “We have to educate before we activate. Just like the Nixon tapes did. I will be introducing such a resolution. The time is now that Congress refuses to accept a rejection of its legal requests.”Democrats in support of launching an impeachment inquiry believe opening the inquiry would help streamline Democrats’ investigations and strengthen their hand in the courts as they battle with the Trump administration over information and testimony. They have also said that opening the inquiry wouldn’t necessarily lead to a full House vote to refer the matter to the Senate for a trial.Pelosi and her top lieutenants, in their rebuttal to Democrats now pushing for impeachment, have said that the majority has not exhausted all of their options to force the administration to heel. They have floated changing House rules to levy fines on individuals who flout congressional subpoenas, among other possibilities.”We still have unexhausted avenues here,” Pelosi told Democrats in a closed-door meeting Monday, according to an aide in the room.House Majority Leader Steny Hoyer said the decision to proceed on impeachment will ultimately be “a collective judgment” from Democrats.”I’m not saying that the Caucus is going to vote on it, but what I’m saying is there will be discussions among the leadership and among the Caucus as to whether or not we have reached a point where it is clear that the responsibility is to move ahead on that. I don’t think we’re there at this point in time,” Hoyer, D-Md., told reporters Tuesday. “I don’t probably think there’s any Democrat who probably wouldn’t in their gut say, you know, he’s done some things that probably justify impeachment.”The majority of Democrats continue to believe that we need to continue to pursue the avenue that we’ve been on in trying to elicit information, testimony, review the Mueller report, review other items that have gone on,” he continued. “And, you know, if the facts lead us to a broader action, so be it.”