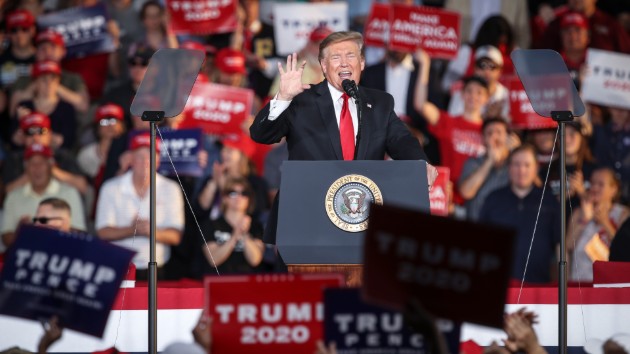 Drew Angerer/Getty Images
Posted on May 22, 2019 by ABC News

(WASHINGTON) — The Trump campaign went on the defensive Tuesday, pushing back against news reports of an internal poll that showed the president losing in key battleground states. Sources familiar with the polling told ABC News the results surprised some members of the Trump team, particularly in states like Pennsylvania and Wisconsin where the data showed the president losing. In response, Trump 2020 campaign manager Brad Parscale took to Twitter, calling the figures “selectively leaked information.” Parscale argued that “the picture being painted is intentionally false, because the information only pertains to a subset of questions asked.” He did not reveal what questions were asked in the poll. Parscale also said the “numbers will tell a different story” once Democrats have “been through … a brutal primary” and the eventual nominee faces President Donald Trump in the general election. “We will win these states again in 2020 and in fact, expand the map to include new states where the President was competitive in 2016,” he added. Parscale said reporting on any potential matchup 18 months before an election is “pointless.” “The results are so speculative as to be almost meaningless,” he said. Copyright © 2019, ABC Radio. All rights reserved.