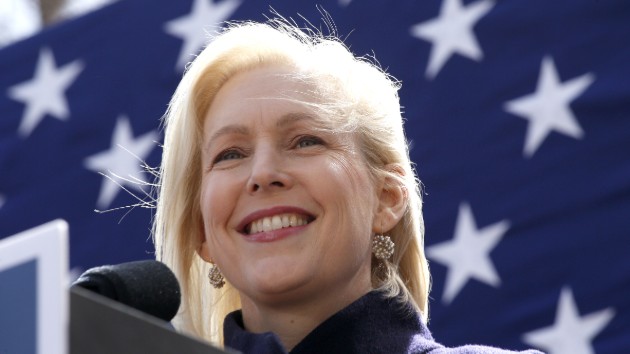 Kena Betancur/Getty Images
Posted on May 22, 2019 by ABC News

(WASHINGTON) — In a newly released agenda, Democratic presidential hopeful Sen. Kirsten Gillibrand tackles an issue that has been a cornerstone of her congressional career — paid family leave and policies that offer support to working families. The plan, aimed at parents with young children, is dubbed the “Family Bill of Rights.” The plan focuses on a number of areas Gillibrand wants to see changed to make raising children safer and more affordable: pregnancy, fertility treatments, adoption, safe nurseries for newborns, paid family leave, affordable childcare and universal pre-K.Gillibrand’s focus on families isn’t new, she’s introduced a paid family leave bill every year since 2013. The push for parent-centric policy has gained popularity as the 2020 Democratic presidential candidates have sought to address affordability in raising children. In February, Sen. Elizabeth Warren released a plan to create government-funded child care centers that would be free for low-income families. Several Democratic candidates, like Sen. Bernie Sanders, Sen. Kamala Harris and Sen. Cory Booker have called for universal pre-K. Booker, Harris, Rep. Eric Swalwell, Rep. Seth Moulton, Rep. Tulsi Gabbard, Sen. Michael Bennet, and Sen. Amy Klobuchar have all co-sponsored Gillibrand’s paid family leave bill.The president’s daughter, Ivanka Trump, has taken up the issue as an advisor to her father.But for Gillibrand, enacting the proposal would make an issue that was a cornerstone of her Senate career a key administrative priority. “Passing the Family Bill of Rights will be my priority in my first 100 days as president,” Sen. Gillibrand said in a statement. “And I believe it will transform American families and their ability to achieve the American Dream.” Though she did not offer details on an estimated final cost, Gillibrand said she plans to pay for the plan by passing a Financial Transaction Tax. According to the Congressional Budget Office , the tax could yield $777 billion in revenue over the next decade.The plan calls for equipping hospitals with better resources and standardizing practices to prevent complications and death during childbirth and addressing the racial disparity in maternal mortality rates. According to the Centers for Disease Control and Prevention, black women die of pregnancy-related deaths at a rate three to four times higher than white women. The plan also calls for increased access to obstetric care in rural areas where women may have to travel further to see a doctor. Gillibrand’s proposal would aim to make fertility treatments more affordable and mandate that insurance companies cover the cost of fertility treatments like in vitro fertilization for couples who have trouble conceiving naturally. The Family Bill of Rights would give equal adoption rights to potential parents regardless of sexual orientation, gender identity, socioeconomic status or religion and offer tax credits to families who adopt.In her proposal, Gillibrand said she would launch a program that would provide supplies for new parents like diapers, blankets and clothing in a box with a mattress that could be used as a nursery bed. The plan calls for the program to be administered through the Department of Health and Human Services with state organizations. Similar programs are already in effect in Ohio, Alabama, New Jersey and Texas. A national paid family and medical leave program would be created under the plan and every child would be auto-enrolled in CHIP at birth and offered access to Medicaid’s Early and Periodic Screening, Diagnostic and Treatment program. Parents would be able to opt out. Gillibrand’s plan also calls for creating universal pre-K programs and expanding access for children with disabilities. Parents would receive a bigger tax credit for child care costs under the plan. It would cover up to 50 percent of $12,000 in qualifying childcare. Copyright © 2019, ABC Radio. All rights reserved.

Biden’s first 100 days live updates: Biden gets time to push agenda before Senate trial
Police, residents plead for ceasefire after South LA sees 59 shooting victims in 1st 2 weeks of 2021
Pastor says addressing resistance to Biden administration is part of the job
John Krasinski, Dan Levy, Regina King are the first ‘SNL’ hosts of 2021
Lawmakers outraged at images of National Guard sent from Capitol to parking garages
‘Game of Thrones’ prequel, ‘Tales of Dunk and Egg’, in the works at HBO