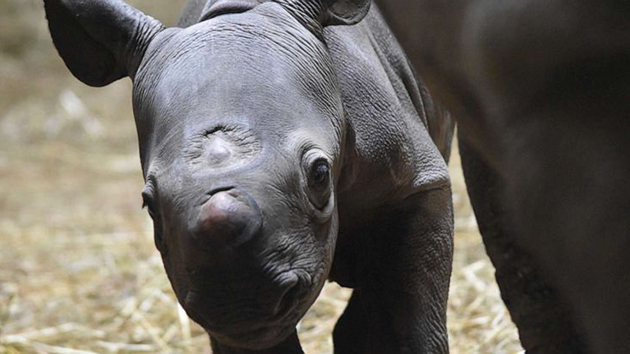 (CHICAGO) — Chicago’s Lincoln Park Zoo recently welcomed the birth of a critically endangered black rhinoceros after more than a year of waiting.A 13-year-old eastern black rhino named Kapuki went into labor Sunday, after 15 months of pregnancy, and gave birth to a healthy calf in her enclosure that evening. The zoo has not yet named the newborn or announced its sex.The calf began to stand on its own after just 53 minutes and has been seen nursing several times, which are “important milestones,” according to the zoo.Animal care and veterinary staff are giving Kapuki and her calf privacy while closely monitoring them from afar via video cameras. The pair will not be visible to the public until further notice.”The first 48 hours of a calf’s life are critical and we remain cautiously optimistic,” Lincoln Park Zoo said in a Facebook post on Monday.

The eastern black rhino, also known as the East African black rhino, is a subspecies of the black rhino and is listed as critically endangered on the International Union for Conservation of Nature’s Red List of Threatened Species.“The potential of a successful calf means much more than a cute face at the zoo,” Mike Murray, curator of mammals at Lincoln Park Zoo, said in a March 20 statement. “A birth represents preservation of a critically endangered species that faces a lot of challenges.”The global population of black rhinos has declined by more than 97% since 1960, mainly due to poaching and the soaring demand for their horns in Asia, where they are coveted for their perceived healing properties, according to the International Union for Conservation of Nature. The population has steadily increased since bottoming out in 1995, but the numbers are still 90% lower today than three generations ago.Copyright © 2019, ABC Radio. All rights reserved.