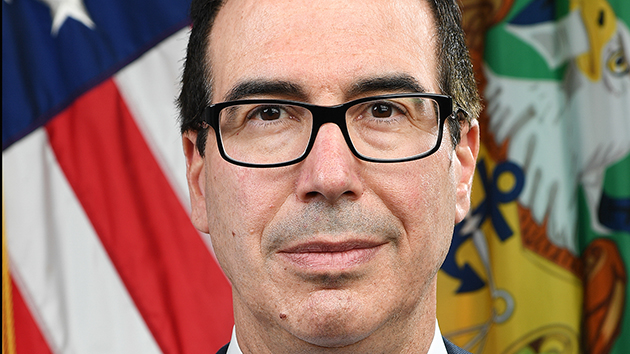 US Treasury Department
Posted on May 22, 2019 by ABC News

(WASHINGTON) — Treasury Secretary Steven Mnuchin said Wednesday that he isn’t planning on putting Harriet Tubman on the $20 bill next year and that a redesign of the currency won’t be issued until 2028.President Donald Trump has called the effort, initiated by the Obama administration, to put an image of Tubman — an African American woman celebrated for her work freeing slaves during the Civil War — on the $20 bill as “pure political correctness.”Questioned by Rep. Ayanna Pressley, D-Mass., Mnuchin said that he is focused on issuing a $20 bill next year with improved security features that would prevent the bill from being reproduced as counterfeit.But the imagery won’t likely be addressed until 2026 and a new bill issued in 2028, Mnuchin told the House Financial Services Committee. The secretary declined to say whether he would support Tubman’s image on the bill.”The ultimate decision on a redesign will most likely be another secretary later down the road,” he said.

In 2016, President Barack Obama’s Treasury Secretary Jacob Lew announced plans for Tubman to replace former President Andrew Jackson on the $20 bill, as part of an effort to get more women on U.S. currency. The plan was set to go into effect in 2020.However, the Trump administration has held off on implementing the plan. At a 2016 town hall on NBC’s The Today Show, Trump called the move “pure political correctness” and suggested putting Tubman on the $2 bill.

United to test all passengers for COVID-19 on select London flights
Kelly Ripa and Ryan Seacrest to give away $10,000 in prizes for virtual Halloween costume contest
Mariska Hargitay brings cookies to New Yorkers waiting in line to vote: “It was the least I could do”
Ellen Pompeo reveals her ‘Grey’s Anatomy’ contract expires this year, casts doubt on show’s future
Food manufacturers increase production to avoid grocery shortages
Coronavirus live updates: El Paso hospitals setting up tents to deal with influx of COVID-19 patients