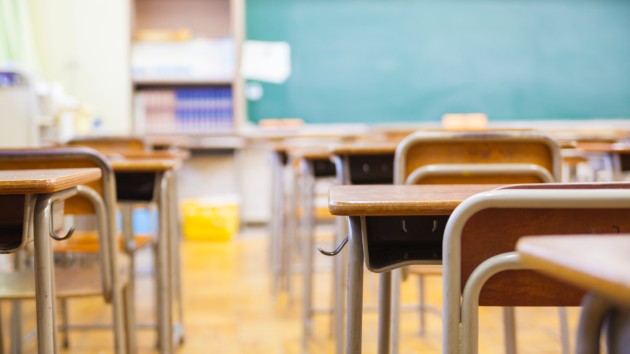 (HILLSBOROUGH, N.C.) — A North Carolina elementary school teacher has been arrested after she allegedly threatened to shoot up the school where she taught.Kristen Thompson abruptly resigned last Friday from Pathways Elementary School in Hillsborough, according to the Orange County Sheriff’s Office. But it was only after her resignation that fellow teachers said she had previously “made threats to shoot up the school.” Thompson was arrested on Tuesday and charged with communicating a threat of mass violence, the Orange County Sheriff’s Office said.”This situation is being handled by law enforcement with the safety of our students and school staff as our utmost concern,” Sheriff Charles Blackwood said in a statement. “Meanwhile, this situation is also being dealt with by school leadership as a personnel issue as well as a safety one. As such, the principal and other administrators are strictly forbidden by law from sharing information about the case.””A threat of school violence is understandably unsettling for the community. Please know that the school and law enforcement are working together as a team to ensure the last few weeks of the school year are safe and productive for our students,” the sheriff added.Thompson was held on a $1,000 bond and is next due in court on June 14.It was unclear whether Thompson had yet obtained an attorney.Orange County Schools spokesman Seth Stephens told The (Raleigh) News & Observer, “Once school administration was made aware about an alleged threat by Kristen Thompson, law enforcement was contacted immediately.”The threat came just weeks after two people were killed and four injured in a shooting at University of North Carolina at Charlotte, about two hours away from Hillsborough.Thompson’s arrest also comes at a time when lawmakers in the state are pushing to arm teachers as a solution to school shootings.A bill was introduced in March in the North Carolina state legislature that would make teachers who carried a gun eligible for a raise, according to Charlotte ABC station WTVD-TV.A similar bill failed to gain traction last year in the wake of the Parkland, Florida, school massacre. Copyright © 2019, ABC Radio. All rights reserved.