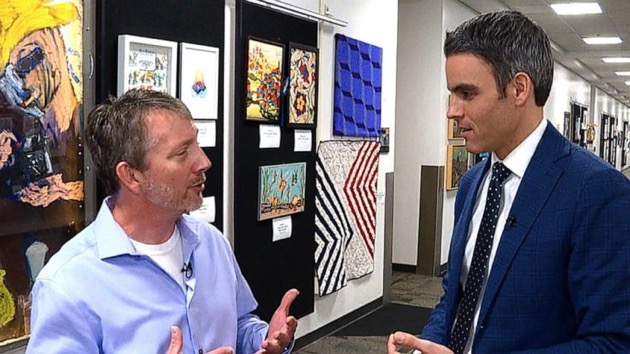 (LANGLEY, Va.) — For two decades, it’s been one of the best-kept secrets deep within the Central Intelligence Agency.Each spring, hundreds of CIA officers display their handcrafted works of art for all to see. Well, at least all those with the top secret clearance required to walk the halls at headquarters.Now, the annual Agency Art Show has had its cover blown. The CIA gave ABC News a first-ever glimpse at the tradition — a chance for Americans to better understand a clandestine workforce about which they know very little.”In some cases, our officers have very stressful jobs, and they do pretty amazing things, and it offers an opportunity for them to blow off some steam,” said Chuck, a volunteer show curator and active-duty CIA officer whose last name must be kept secret.The main employee entranceway, where cameras and cellphones are never allowed, is a kaleidoscope of color, multimedia and subject matter in an otherwise drab, nondescript and windowless office.”It’s kind of like this explosion of color on our walls,” said recent CIA hire M.R., whose emotionally charged photograph of a friend’s infant posing on a wedding dress is a crowd favorite.There were oil paintings, clay sculptures and photographs. Needlepoint and delicate blown glass were among those awarded best-in-show. Avant-garde furniture pieces and 3D art works are among the more eclectic submissions and conversation starters.”Being able to see other officers interact with my artwork or others’ artwork and see them smile and contemplate, ‘What does it mean?’ builds camaraderie and personal satisfaction,” M.R. said.Placards next to each piece list only first names and a last initial. Some of the works have had their artists’ signature blacked out. Big black holes in the display mark places where some works were removed to protect their creators’ identities from ABC News’ cameras.The culture of secrecy at the CIA prevents many employees from openly sharing details about their work outside the office, and, officials said, it also limits the sharing of details about their personal lives on the inside.”When I first got into the art show it was really about revealing something about ourselves, something personal,” Chuck said. “We have these periods of discovery with our colleagues.”While its high-profile missions, including the 1980 plot to free American diplomats from Iran, have become the stuff of blockbuster Hollywood movies, the attention is rarely sought.CIA officers were the first U.S. forces on the ground in Afghanistan after the Sept. 11, 2001, attacks, and it was the CIA that discovered Osama bin Laden’s hideout in Pakistan nine years later.The 9/11 attacks remain a poignant subject of many CIA officers’ personal art.”9/11, for many people, but particularly folks within this building, in the agency, was a marker stone in time. A lot of folks were energized. We had a huge hiring boom,” Chuck said.”It is amazing to see the emotional release along this hallway at times,” he added. “It is the burden of 9/11, but it is also the oppressive business, the serious nature of the business and this is a release from these artists these are artists. They do this artwork on their on their own time and the art show is run by all volunteer staff. And so it’s really a raw, grassroots effort.”The show runs for six weeks every spring.This year’s display coincided with the CIA’s annual memorial ceremony, recognizing officers who made the ultimate sacrifice — sometimes on classified missions, with their names never being publicly revealed.”We honor the men and women of this Agency who perished in the line of duty. The cause to which they devoted their lives — the freedom and safety of Americans — endures,” CIA director Gina Haspel said in a statement on Tuesday.Fallen officers are honored with stars engraved on the Memorial Wall. This year, the agency added four more stars, raising the total to 133 CIA officers who’ve died serving since the organization’s inception in 1947.”Coming here, you see how real the people are. They’re not shadowy figures, you know. They’re people. They have emotions and families, and they’re soccer moms and they’re football dads, just like everyone else,” said CIA officer M.R. “Being able to bring our whole selves to work is a benefit of working here because outside, you know, we can’t do that. But inside, we can be everything that we are.”Watch ABC News Live The Briefing Room Wednesday at 3:30 p.m. and 5:30 p.m. EDT for an exclusive look inside the CIA.Copyright © 2019, ABC Radio. All rights reserved.

Scoreboard roundup — 1/25/21
‘The Bachelor’ recap: Tensions mount as five new ladies join the fight for Matt’s heart
Winter storms moving across US with snow, freezing rain and flooding
Wealthy in Hollywood reportedly using private jets, agents, and even bribes to score COVID-19 vaccine
‘Da 5 Bloods’, ‘Mank’, ‘Soul’ among AFI’s Movies of the Year; ‘The Mandalorian’, ‘The Crown’ top TV
Kelley Flanagan says she would “consider” being the next Bachelorette