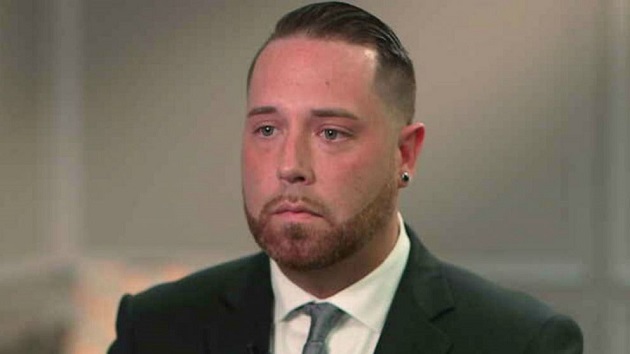 (NEW YORK) — A New York man said he was shocked beyond measure when he discovered that his estranged wife, a New York City police officer, allegedly hired a hit man to kill him.”I can’t believe it. I’m still in shock,” Isaiah Carvalho told ABC’s Good Morning America in an interview airing Wednesday. “I’m still lost over this whole thing and I’m trying to process everything.””We didn’t have like a heated custody battle. We were about to reach an agreement, so I don’t see why she would attempt to do this to me, or to my son for that matter,” he added.Carvalho, 32, said five months had passed since he filed for divorce from his wife, New York Police Department officer Valerie Cincinelli, but he never thought the relationship could get as bad as it did.Federal investigators said Cincinelli, a 12-year-veteran of the force, paid her boyfriend $7,000 to help her hire a hit man to kill Carvalho and the boyfriend’s teenage daughter. Instead, her boyfriend reported her to police and agreed to help them gather evidence against her, according to court records.Authorities broke the news to Carvalho last week, revealing that his wife had allegedly been plotting to kill him since February.”They told me, ‘We don’t know how to tell you this, but your wife put a hit out on you.’ And my first response was, ‘Where’s my son?"” Carvalho recalled. “They told me what they told me … and they’re like, ‘We need your help. We’re gonna need you to do something for us in order to further our investigation."””They ended up taking me to an undisclosed location and had me fake my death and took pictures of it,” he added.He said police took gruesome photos of him pretending to be dead — an act he says took an emotional toll on him.”It was the craziest thing I’ve ever had to experience,” he said. “They had me sit in my car. They put glass on the floor and all over me, and had me hunch over into the passenger seat.”Authorities used photos of the staged crime scene to convince 34-year-old Cincinelli that her plan had succeeded, court records show.A Suffolk County detective went to Cincinelli’s Long Island home at around 10 a.m. last Friday — as a part of an FBI ruse — to notify her about their investigation into her estranged husband’s death.An undercover FBI agent sent her a text message about an hour later, purportedly from the killer. It included a photo of the supposed murder scene and an instruction to send an additional $3,000 to kill the boyfriend’s daughter.She immediately began talking about an alibi with her boyfriend, who was cooperating with the FBI, and ordered him to delete their text conversations, according to the records.That’s when authorities moved in to arrest her. She was charged with conspiracy to commit murder and was being held without bail as of early Wednesday.Cincinelli’s family came to her defense earlier this week. Her father said he believes she’s being set up by the boyfriend, but he declined to disclose the man’s identity.”I don’t know what happened, but I do know my daughter and I knew this was not true when I first heard it,” Louis Cincinelli told ABC News. “She was going out with some wacko pathological liar who had her locked up once before, saying that she pulled a gun on him and threatened to kill him, but then he went to court and said in open court, he recanted it and said he had made it up. Now … she throws this bum out again and two weeks later this happens.”Cincinelli and Carvalho have active restraining orders out against each other — a matter he declined to discuss.Carvalho said he doesn’t “have anything to say about” about Cincinelli’s father’s accusations, but does have one question for his estranged wife: “Why?””I didn’t want to believe it, but apparently it’s true,” Carvalho said. “I didn’t think she would be capable of it, but now I don’t put anything past her.”