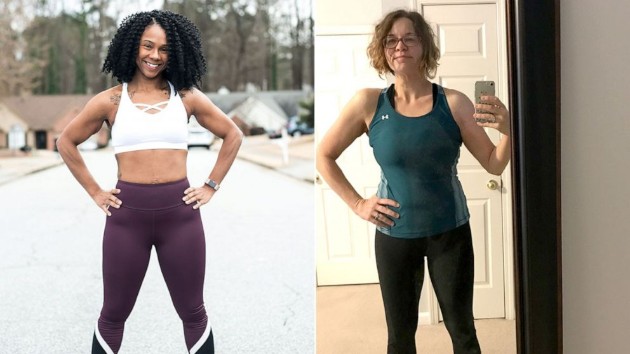 Courtesy Victoria Brady/Laura Rosenthal
Posted on May 22, 2019 by ABC News

(NEW YORK) — Being a mom is hard enough but being a mom who struggles with weight can be devastating. For Victoria Brady, it was a pediatrician expressing concerns about her 1-year-old son’s weight that spurred her to make a change for herself too. “I decided I was tired of failing and it was time to break the cycle of obesity in my family,” Brady said. “I wanted my sons to live a healthier lifestyle than I did so they wouldn’t have to endure what I did growing up overweight.”Since that pediatrician appointment in June 2017, Brady, 31, a mother of two, has lost 125 pounds, dropping from a size 22 to a size 6.For another mom, Laura Rosenthal, of Hendersonville, Tennessee, it was her 40th birthday that was all the motivation she needed to lose weight. “I turned 40 and was very unhappy with my life,” she said. “I decided to get healthy so that I did not waste the next 40 years of my life feeling miserable.” Rosenthal, mother of an 8-year-old daughter, joined Weight Watchers in December 2017 and has lost nearly 120 pounds.Both Brady and Rosenthal are among the weight loss success stories featured in People magazine’s annual 100-pound weight loss feature, available in the newest issue of People on newsstands this Friday.Here is how Brady and Rosenthal said they lost the weight:1. Creating healthier versions of comfort foodRosenthal, now 41, said she grew up on a “meat and potatoes diet.” She has found healthier ways to make the foods she loves, rather than subsisting on quinoa and kale. When she makes tacos, Rosenthal now uses chicken instead of beef and salsa instead of sour cream. She uses fat-free cheese so she can still have tortilla chips on the side, but dips the chips in black beans instead of a cheese sauce. “I make choices every day, like would I rather have beef in my spaghetti or a piece of garlic bread?,” she said. “It allows me to still choose what I want the most and I never feel deprived.” Brady said she has also found ways to make her favorite dishes healthier, using low-carb tortillas to make pizza, for example, and making banana protein pancakes instead of the more indulgent option. 2. Having a cheat meal, not a cheat dayRosenthal enjoys a “cheat meal” every Tuesday night, but keeps it to that versus an entire day of eating whatever she wants. She also tries to incorporate all foods into her diet to help avoid cravings.”I personally don’t believe in excluding anything from my diet, be it carbs, fat or whatever, so that’s another reason Weight Watchers works for me,” she said. “God put all those elements into food and it’s about balance, not deprivation.” 3. Fitting in exercise after dietBoth Rosenthal and Brady are now avid exercisers but they focused on their diets first. Rosenthal lost 100 pounds before she started to really work out. She started out walking 30 minutes a day, five days a week on a treadmill at work, then added in three days per week of a circuit-training workout. Brady also fit in exercise at work, participating in group fitness sessions at her job’s gym and walking four days per week. As she lost weight, she started “exploring more intense workouts” like high intensity interval training (HIIT) and weight lifting. 4. Staying committedBrady admits there were days during her weight loss journey that she was “depressed and discouraged” but said she never let herself get defeated. “For a while I believed that I would need weight loss surgery or that I would always be obese,” she said. “However, this journey has taught me that nothing is impossible until God says it is.” Copyright © 2019, ABC Radio. All rights reserved.