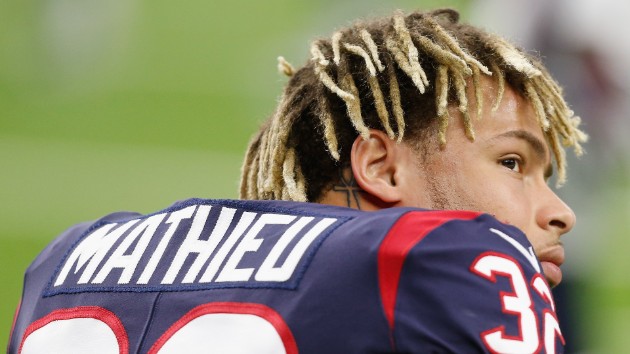 (NEW YORK) — A relative of NFL star Tyrann Mathieu allegedly tried to extort him for $5 million, according to federal court documents unsealed on Tuesday. Mathieu, who now plays for the Kansas City Chiefs after stints with Houston and Arizona, was allegedly blackmailed over private information, with the relative saying he would send private information to gossip outlet TMZ if he wasn’t paid. Geourvon Keinell Sears, 20, is described in the criminal complaint as “a family member and heretofore a close associate of Victim #1.”While the victim is unnamed in the criminal complaint — only referred to as a professional athlete with the initials “TM” — Mathieu’s lawyer, Denise White of EAG Sports, confirmed to Kansas City ABC affiliate KMBC-TV that Mathieu was the victim.White said Mathieu is dealing with a “private and personal family issue,” and offered no further comment.Sears allegedly spoke to Mathieu on the phone in late April and demanded the NFL star deposit $1.5 million in the suspect’s bank account by the end of the week, according to the complaint. Mathieu refused and blocked Sears from being able to contact him by phone.But a day after being blocked, the suspect allegedly contacted a friend of Mathieu and said in a text, “5 MILLION BY FRIDAY IM DONE TALKING EMAILING TMZ NOW.” He also provided his bank account information so Mathieu, or his associates, could deposit the money, according to court documents.Sears then allegedly went as far as to send Mathieu’s friends a voice message saying, “I want 1.5 million by Friday or I am going to kill all you all.”Mathieu told police he feared for his and his family’s safety and believed Sears was capable of violence, according to the document.The suspect then spoke to Mathieu’s agent by telephone and said he would “injure TM’s reputation by alleging sexual misconduct” if he didn’t receive the money.Sears was initially expected to make a first court appearance in Louisiana, where he lives, on Thursday, but his lawyer successfully petitioned for 30 more days to review evidence in the case.He will appear in court on June 21.Sears was released on $25,000 bond and ordered to have no contact with Mathieu or his associates, in person or via social media, cellphone or computer. He is being held on home incarceration and with a monitoring device, according to the court order.Mathieu struggled with disciplinary issues while at Louisiana State University, but his play on the field was electric as both a freshman and sophomore. As a sophomore he was named a finalist for the Heisman Trophy, awarded to the best college player in the nation each year.But following the 2011-12 season, the star was dismissed from the team by head coach Les Miles. While the reason was never released by the school, ESPN reported that he had failed multiple drug tests. Mathieu enrolled back in LSU that fall as only a student, but was arrested for drug possession in October 2012 and declared for the NFL draft a month later.Mathieu was drafted in the third round due to concerns about his behavior, but quickly became one of the best safeties in the league paired with his former college teammate Patrick Peterson. He made the All-Rookie team in 2013 and was a first-team All Pro in 2015. He signed a five-year, $62 million deal following that season, but was injured in 2016 and released by Arizona in 2018.He played one season with the Houston Texans before signing with the Chiefs this offseason for three years and $42 million. Copyright © 2019, ABC Radio. All rights reserved.