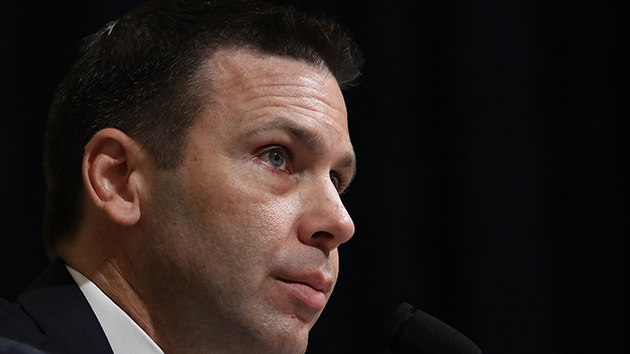 (WASHINGTON) — In a hearing Wednesday examining the Department of Homeland Security’s latest budget requests, Democratic Rep. Lauren Underwood accused the Trump administration of crafting “intentional” policies that have resulted in the deaths of migrants apprehended after crossing the U.S.-Mexico border.”Congress has been more than willing to provide the resources and work with you to address the security and humanitarian concerns, but at this point with five kids that have died, five thousand separated from their families, I feel like and the evidence is really clear that this is intentional,” Underwood said. “It’s intentional. It’s a policy choice being made on purpose by this administration and it’s cruel and inhumane.”Throughout the hearing, DHS Acting Secretary Kevin McAleenan was pressed repeatedly by Democrats over the way migrants are treated in U.S. custody.”That’s an appalling accusation and our men and women fight hard to protect people in our custody every single day,” McAleenan said in response to Underwood’s charge.Committee Chairman Bennie Thompson temporarily stopped the proceedings after a Republican member asked for Underwood’s comments to be removed from the record. Following some procedural confusion, the committee voted to strike Underwood’s comments and continued with questions for the acting secretary.When pressed on the current state of migrant holding facilities at the border, the acting secretary acknowledged that “those conditions are not acceptable. He said funding from Congress was needed to improve Customs and Border Protection facilities along the border.”These tragedies are devastating to us and they are avoidable,” McAleenan said.Dem. Rep. Nanette Barragán further pressed McAleenan, saying Trump administration policies have intentionally inflicted hardship on migrants to deter crossings. Referencing the Trump administration’s now discontinued zero tolerance policy, Barragan called the practice “despicable.””This administration is on record in saying they did this to deter people from coming,” Barragán said. “And so to knowingly separate children and families by prosecuting parents that was going to result in the separation and then mentally harm children, that’s despicable. And that is why people believe that what this administration is doing is intentional.”

Earlier this week, the Congressional Hispanic Caucus demanded the administration take action following news of a teen who died while being held in Border Patrol custody.The 16-year-old, who was traveling without his parents, died at a U.S. Border Patrol station on Monday while waiting to be picked up by the Department of Health and Human Services.Joined by fellow Democratic caucus members, Rep. Joaquin Castro, D-Texas, said the Trump administration should end policies that force migrants to return to Mexico throughout the asylum process.”This is an epidemic of death by the Trump administration,” Castro told reporters.The Hispanic Caucus chairman accused the administration of withholding information from Congressional inquiries, citing the recent death of a 2-year-old whose name has not been made public.”They’re concealing the truth of these atrocities to the American people,” Castro said.Authorities continue to raise warnings about the dangerous conditions faced by thousands of migrants traveling to the U.S. through Mexico. Last year Border Patrol recorded 283 deaths along the southern border.Copyright © 2019, ABC Radio. All rights reserved.