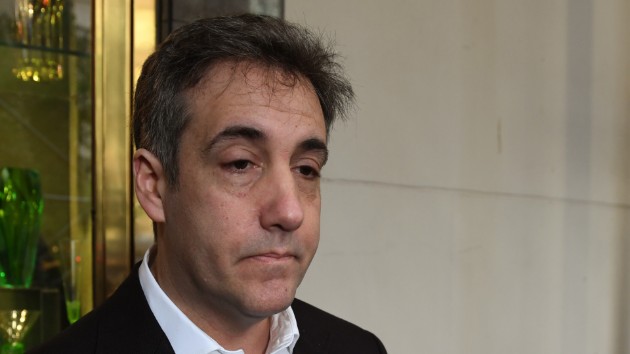 (WASHINGTON) — A trove of documents related to the government’s case against Michael Cohen, the president’s onetime personal attorney, will remain redacted for now, a federal judge ruled Tuesday, after prosecutors informed the court that some information in them pertains to “an ongoing investigation.” Judge William Pauley’s ruling on Tuesday suggests the government’s probe of potential campaign finance violations during the 2016 presidential election remains active. During his plea hearing last year, Cohen implicated his former boss in the scheme.“In view of the ongoing aspects of the government’s investigation,” Pauley wrote Tuesday, “this court determines that continued redaction of the materials is justified at this juncture.”The “materials” to which Pauley referred include nearly 900 pages of previously sealed court records describing the basis for an April 2018 search on Cohen’s home, office and hotel room.Cohen, who is currently serving a three-year prison sentence, pleaded guilty in 2018 to campaign finance violations, tax evasion and lying to Congress.Federal prosecutors accused Cohen of violating campaign finance laws by paying off two women who allege to have had affairs with President Donald Trump. Cohen, at his plea hearing, said he acted “in coordination with and at the direction of” the then-candidate to execute the payments.Trump has argued the payments amount to nothing more than a “simple private transaction,” and do not qualify as campaign finance violations.On Tuesday, Pauley asked prosecutors to justify their request to keep certain information secret by July 15, at which time the government must “[identify] the individuals or entities subject to any ongoing investigations and [explain] any need for continued redaction.”Copyright © 2019, ABC Radio. All rights reserved.