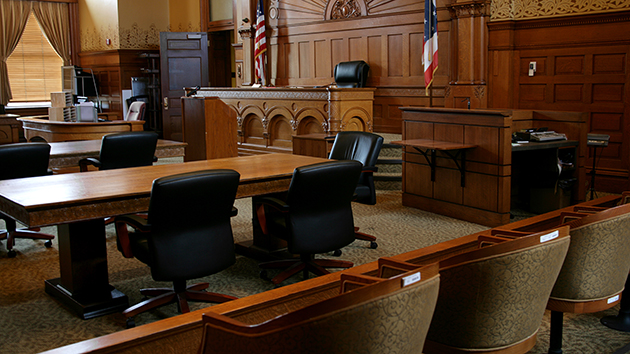 (HOPKINSVILLE, Ky.) — A commercial airline pilot was arraigned Wednesday on three counts of murder stemming from the brutal 2015 killings of three of his neighbors, including two whose bodies were found burned beyond recognition in a torched car.Christian R. “Kit” Martin, 51, a former Army Ranger major and a pilot for the American Airlines subsidiary PSA Airlines, made his first appearance in Christian County Justice Center in Hopkinsville, Kentucky. He was arrested on May 11 at the Muhammad Ali International Airport in Louisville and pulled off an airplane full of passengers just before it was set for takeoff.Martin, wearing an orange jail jumpsuit with the words “Christian County Jail” written on the back, was brought into the courtroom shackled and stood in front of the bench of Judge John L. Atkins to be arraigned in the killings of Calvin and Pamela Phillips and their neighbor, Edward Dansereau.Martin’s attorney, Michael Thompson, entered pleas of not guilty on behalf of Martin and waived a formal reading of the charges.In addition to the three counts of murder, Martin was arraigned on charges of first-degree burglary, first-degree arson and tampering with physical evidence. If convicted of the charges, he could face the death penalty.Atkins ordered Martin to return to court on July 10 for a preliminary hearing and to remain in jail without bail.Relatives of Calvin and Pamela Phillips, including their son, Matt Phillips, attended Wednesday’s hearing but did not speak to reporters afterward.Kentucky Attorney General Andy Beshear said at a news conference earlier this month that his office took over the investigation after Matt Phillips met with him two years ago and expressed fears the case might never be solved.At the time of the slayings, Martin lived across the street from the Phillips couple and Dansereau.Martin allegedly broke into the Phillips’ home in Pembroke, Kentucky, on Nov. 18, 2015, and fatally shot Calvin Phillips with a .45 caliber pistol, an indictment filed against him alleges. That same day, he allegedly shot and killed Pamela Phillips and Dansereau with a .22 caliber firearm, according to the indictment.Martin allegedly put the bodies of Dansereau and Pamela Phillips in a car and drove into a cornfield several miles from their neighborhood, where he set the vehicle on fire with the victims’ bodies inside, according to the indictment.The killings occurred just days before Martin faced a military court-martial on charges of sexual assault, child abuse and conduct unbecoming an officer, according to military records.Calvin Phillips was expected to testify at Martin’s court-martial proceedings, said Martin’s former attorney, Tucker Richardson.Richardson told ABC Nashville affiliate WKRN earlier this month that Phillips was going to be the defense’s “star witness” in the court-martial hearing.”If their motive is he killed Calvin Phillips ’cause he was going to testify in his upcoming court-martial, well that was nothing further than the truth,” Richardson told WKRN.Martin was ultimately found guilty on lesser charges of mishandling classified information and simple assault, according to Richardson. He was dismissed from the military and placed under “confinement for 90 days,” according to the records.Martin’s fiancée and daughter also defended him, saying he is innocent.”He’s an honest man,” Martin’s fiancée, Laura Spencer, said in an interview this month with ABC station WTVD-TV in Durham, North Carolina. “So his family and I believe he is 100% innocent.”Martin’s daughter, McKenzie, also expressed support for her father, telling ABC News in a statement, “My dad is an American hero.”