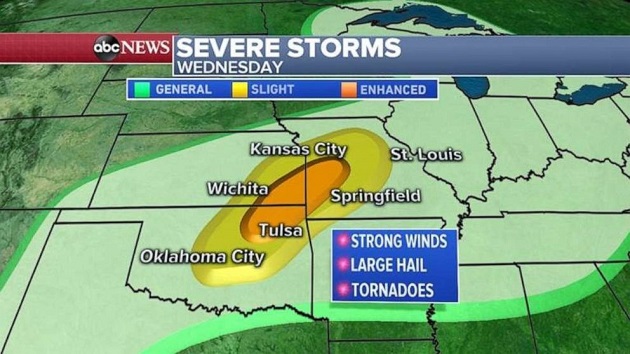 (NEW YORK) — The Southern Plains were hit hard over the past two days with 56 reported tornadoes, 230 damaging storm reports and almost 9 inches of rain in Oklahoma.There have been three deaths reported due to the storm, including a woman who died in Perkins, Oklahoma, after driving around a barricade and getting washed away by floodwaters. Flash flood alerts stretch from Montana to Missouri on Wednesday morning with flood warnings mostly in Kansas, Oklahoma and Missouri.The storm system that brought all the severe weather and flooding to the Plains on Tuesday will not move much, so it could bring more severe weather, including tornadoes, from Oklahoma to Missouri.Oklahoma City and Tulsa, Oklahoma; Wichita, Kansas; and Kansas City and Springfield, Missouri, are all at risk Wednesday for damaging winds, large hail and tornadoes.On Thursday, part of the storm system moves into the Northeast and brings a chance for severe weather for New York City, Philadelphia and Washington, D.C.The biggest threat will be damaging winds, but we can’t rule out a few tornadoes.At the same time, yet another storm system will move into the Plains from the west with more severe weather from Texas to Missouri, including damaging winds, large hail and tornadoes.More rain is expected in the Plains and parts of the Midwest over the next couple days, with some areas in Kansas and Missouri getting an additional 4 to 6 inches of rain and possible flooding.