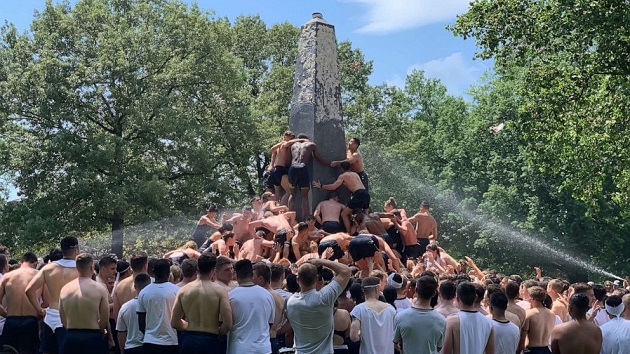 (ANNAPOLIS, Md.) — The U.S. Naval Academy freshmen scaled the Herndon Monument in the annual climb Monday.The event was part of a tradition in Annapolis, Maryland, where the freshmen or “plebes” build a human pyramid and climb a 21-foot monument to replace the “dixie cup” hat with an upperclassman’s hat. Finishing in one hour and five minutes, they beat last year’s time of two hours and 21 minutes.Upperclassmen slathered the monument in nearly 50 pounds of vegetable shortening and freshmen were required to remove their shoes before they started.”We call it the culminating event for the end of their freshmen year,” said Jenny Erickson, a U.S. Naval Academy spokesperson.The first recorded climb was in 1950, without grease. The greasy climb is a rite of passage for “plebes,” or freshmen, to mark officially becoming Midshipmen 4th Class. Christian Schwein, 19, from the 27th Company, had the honor of placing the hat atop the monument this year.According to tradition, the midshipman who gets the hat on top will become the first admiral in the class.The Herndon Monument is named for Navy Cmdr. William Lewis Herndon, who “possessed the qualities of discipline, teamwork and courage.”Much like the monument, the climb represents the teamwork, and perseverance freshmen have to endure in the first year at the academy. In addition to their academic responsibilities, they undergo military-style training including six weeks of “Plebe Summer” which is similar to basic training in the military. Copyright © 2019, ABC Radio. All rights reserved.