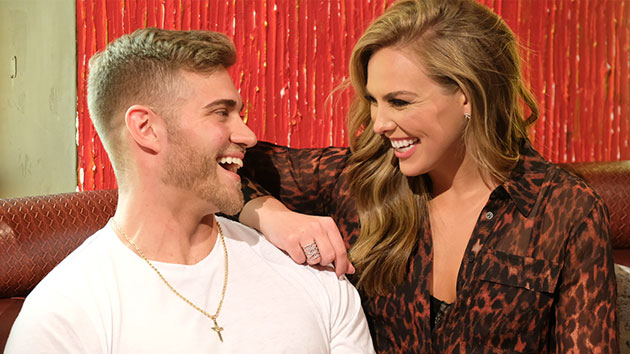 (NEW YORK) — Monday’s episode of ABC’s The Bachelorette was a wild night of drag queens, roller derby and chicken nuggets.

The first group date included Grant, Luke S., Mike, Jed, Jonathan, John Paul Jones, Dylan and Luke P., all of whom got to experience a little of Hannah’s world when they competed in “The Mr. Right Pageant.” First, each of the eight bachelors, coached by a trio of drag queens, strutted their stuff on the runway wearing nothing but a Speedo.  That was followed by a talent competition.

Luke P — the clear winner of the runway portion of the competition — had Hannah “sweating” as he paraded and flexed his well-chiseled body.

Jed, the Nashville-based singer/songwriter, seemed to have the talent portion locked up when he played guitar and serenaded Hannah with an original song about being her “Mr. Right.” However, Luke P stole Jed’s thunder by delivering a speech that ended with him telling Hannah that he was “genuinely falling in love” with her — not exactly a talent, but enough to earn him the title of “Mr. Right.”

Luke’s speech may have won the competition but it didn’t sit well with the other guys, who thought it was way too soon to start throwing around the “L” word — particularly Mike, who delivered an after-party toast to “people just being real, being honest” and not “overstepping your bounds.”

Hannah felt differently, telling the camera after speaking privately with Luke that she absolutely believed him and that he said “everything my heart needs him to say.”

Mike wasn’t finished with Luke, though, calling him a “dog” to his face and questioning how he could fall in love so quickly. Luke answered, “If I want something, I’m going to go and get it.”

Ultimately, it was Jed who scored the group date rose from Hannah, who said that he “calmed” her.

Back at the mansion, the first one-on-one date card went to Tyler G. It was a fairly non-eventful outing that consisted of the two riding through the mud on a pair of ATVs, followed by a rooftop dinner at the Hollywood Roosevelt Hotel.  After opening up about their hopes and dreams, Hannah gave Tyler the date rose.

The second group date went to Devin Matteo, Daron, Connor J, Kevin, Dustin, Tyler C., Joey, Peter, and Garrett, all of whom who faced off in a roller derby competition hosted by comedian/actor Fred Willard and The Bachelorette’s Chris Harrison. Daron proved to be the superstar in this competition, leading his group to a decisive victory.

Despite a scolding from Tyler C., Garrett and Kevin, Cam — whose motto is ABC, “Always be Cam” – was unapologetic, telling Tyler, “We all signed up for this knowing that this comes with the territory, anybody could’ve done what I did. You don’t have to ask for permission, you’ve gotta follow your heart, dude.”

When order was restored, Dustin picked up the date rose, winning Hannah over with his “shy and quiet” personality.

Cam was only getting started, though. At the pre-rose ceremony cocktail party, he interrupted Kevin’s time with Hannah by having the three of them take part in a bizarre “chicken nugget ceremony” that consisted of them eating the nuggets surrounded by a bunch of rose petals lined up in the shape of a heart. He then pulled out what appeared to be a ring box, which actually contained honey mustard sauce.

Luke P. was also just getting started. After taking Hannah to another room and giving her a message — and another look at his six-pack abs — the two began making out. That led to an awkward encounter with the other Luke, who walked in on them.

At the rose ceremony, Hannah said goodbye to Connor J., Daron, Peter and Matthew.  It looked like the show was over, but Cam and Luke P. weren’t done.

After Cam made a toast to “Hannah Ayala” — his last name, as he explained — Luke walked in on Hannah as she was addressing the camera with some final thoughts to close the episode. Luke repeated his earlier claim that he “felt like everything in time stopped” when he looked in her eyes for the first time, and that everything he’d been telling her is “100 percent true.”

Hannah, who seems smitten with Luke, seemed to believe him, and the show ended with them wrapped in each other’s arms.

Here are the 18 remaining suitors: