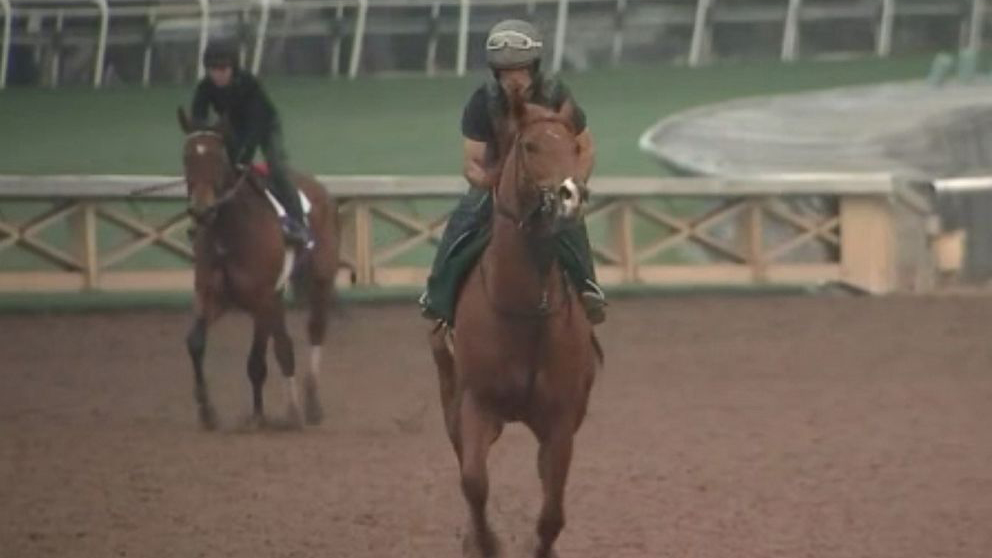 (LOS ANGELES) — Two horses died at Southern California’s prominent Santa Anita racetrack over the weekend, marking 25 thoroughbred fatalities there in the last six months.A pair of 3-year-old geldings sustained fatal injuries in separate incidents on Friday and Sunday as the embattled racetrack works and employ reforms to stem a rash of unprecedented horse deaths.One of the horses, a male called Spectacular Music, sustained a rare injury to the pelvis while racing near the half-mile pole on Sunday, according to the track.”The horse did not fall, but was pulled up at about the half mile pole at the discretion of Jockey Jorge Velez and vanned to receive a comprehensive evaluation by on-site world-class veterinarians,” Santa Anita said in a statement Monday.”Equine pelvic injuries are rare,” it added, “and further evaluation is being conducted by the California Horse Racing Board, per protocol, to understand what could have caused this uncommon injury.”The other gelding, Commander Coil, died after sustaining a shoulder injury in a training session on Friday morning, the racetrack revealed Saturday.”Equine shoulder injuries are rare, especially for a horse that is galloping as opposed to breezing or racing,” a spokesperson for Santa Anita said in a statement to ABC News. “A comprehensive evaluation will be completed to understand what might have caused this uncommon injury.”Santa Anita Park, owned by the Canadian-based Stronach Group, postponed several races earlier this year and hired respected trackman Dennis Moore to help assess the condition on its main track.Some experts attributed the cluster of thoroughbred deaths to inclement weather. Southern California had an unusual amount of rain this past season after many years of drought or near drought, which would have impacted the quality of the track the horses can run on safely.”Every time it rains you seal the tracks as hard as it can get. So the water runs off of it,” Clifford Sise, a veteran horse trainer currently working with 15 horses at Santa Anita and other tracks, told ABC News Saturday. “It would stop raining only three days, where you can really work on it. You need at least seven, eight days to dry out. To go to the bottom of it and the cushion and work on it. It was nobody’s fault.”At least 25 horses have died while racing or training since the track opened for the winter season on Dec. 26. The horse deaths prompted several investigations earlier this year, including a task force convened by the Los Angeles District Attorney’s Office and the California Horse Racing Board.The most-recent deaths were the first ones reported since track officials introduced a new reforms last month, track officials said.”Before this catastrophic injury, unprecedented health and safety reforms were introduced at Santa Anita Park. From April 1 to May 18, there have been 698 starters on the main track and 651 starters on the turf course without fatalities,” Santa Anita said in its statement Monday.”The Stronach Group is committed to advocating for the health and safety of horses and riders and will continue to work with stakeholders in California and nationally to drive further progress,” it added.