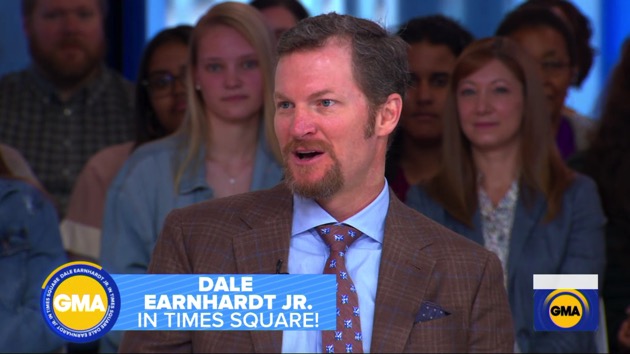 (NEW YORK) — Dale Earnhardt Jr. may be retired from NASCAR but that’s not keeping him out of the driver’s seat.At home he’s pulling full-time dad duties alongside his wife Amy.He said he is blown away experiencing his daughter Isla’s first milestones as she starts to make some speedy moves.”When she started crawling we were so excited that she started moving around and now she’s just running everywhere,” he said on Good Morning America. “It’s just amazing to watch them every day process new things.”He continued, “I was so worried I was going to miss it and be doing something and not at the house when that happened, but we were all together, the whole family and [it’s] just incredible to see her do that.””She’s really smart,” he gushed of his 13-month-old. “She just now started to mimic the words we say.”The two-time Daytona 500 winner will be behind the wheel again soon, but it won’t be a race car. He will pilot the 2019 Corvette Grand Sport pace car and lead the field of 33 to the green flag at the world-famous Indianapolis Motor Speedway.”As a race car driver you just go and do on instinct, but as the pace car driver there’s a process, there’s rules, there’s a speed you have to run. And in Indy I think there’s a protocol where you speed the car up with each lap,” he explained. “That’s different then what we do in NASCAR.””I know it’s not going to be that complicated, [maybe] I’m overthinking it a little,” he added.The famed NASCAR driver will be back in his wheelhouse come Labor Day weekend.Every year at Darlington Raceway, drivers take to the track in an official throwback paint scheme. This year Earnhardt Jr., 44, will get to drive an extra special set of wheels for the NASCAR XFINITY Series Sport Clips Haircuts VFW 200 race.”The car is basically a throwback to my dad’s 1975 paint scheme, his first race in the cup series at Charlotte,” Earnhardt Jr. said of the baby blue No. 8 car. “I’m really looking forward to it, [we have] a great looking race car and it’s the one race I’ll run this year. I don’t have any plans to race anything after that. Never say never, but this might be the last one.”In the meantime, Earnhardt Jr. still catches glimpses of car history at his own home.”I have this race car graveyard. It’s hard to explain,” he said with a laugh. “It’s like 80 acres of woods and about 80 or 90 race cars in the graveyard and they all have a different story.”One of the cars that made it’s way to the “graveyard” was an old land speed record car that someone donated to him and was “hidden” until recently.”I actually tasked my property manager, a friend of mine, to put the cars back there. I don’t know where they go — that’s the fun part,” he said.”You get on the four-wheeler and I go riding back there with Isla and Amy and find out where they’re sitting and that land speed record car hid from me for a year before I found it.”

Elliot Page and Emma Portner announce divorce after three years of marriage
John David Washington talks following in the footsteps of his Oscar-winning dad, Denzel Washington
Watch now: Action and joke-packed trailer for Disney’s animated ‘Raya and the Last Dragon’
Vanessa Bryant remembers Kobe and Gianna on one-year anniversary of their deaths
What to know about the link between mental health and heart disease
Dale Moss says “there’s no one person to blame” for ending engagement with ‘Bachelorette’ star Clare Crawley