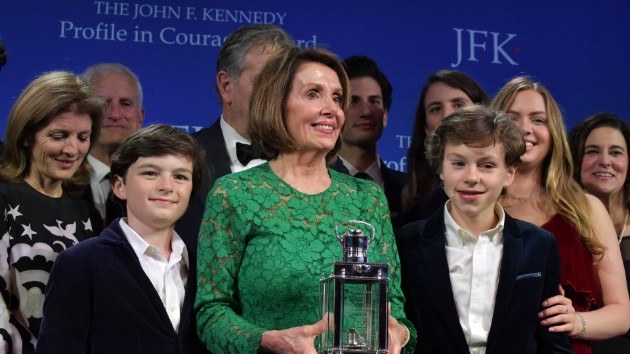 Paul Marotta/Getty Images
Posted on May 21, 2019 by ABC News

(WASHINGTON) — Speaker of the House Nancy Pelosi, D- Calif. was honored Sunday night with the 2019 John F. Kennedy Profile in Courage Award — the first woman to net such an achievement.The award recognizes a public official who demonstrates politically courageous leadership.“Thanks to her courage we have healthcare for all Americans, and the most diverse Democratic Congress in American history,” said Caroline Kennedy. Speaker Pelosi was critical in passing The Affordable Care Act during the Obama administration.Pelosi started her 17-term career in 1987 as a congresswoman in California, and she has been the only woman to be elected, then re-elected, as Speaker of the House.She recognized the late President John F. Kennedy with kind words.”His self-deprecating wit and the natural grace he symbolized and conveyed truly did captivate and inspire the country,” Pelosi said. “Our presence…celebrates and honors him. I too am honored with this award as something I accept with a full and humble heart.”Pelosi thanked her family, congressmen and the Kennedy family.“The Kennedy family has given so much to America’s history and to America’s future,” she said.

She closed her acceptance speech by recounting fond memories of Kennedy: “In college, I attended the inauguration… and on that freezing, thrilling day, I heard his electrifying call to public service, never did I suspect then, later as House Democratic leader, I would participate in a ceremony commemorating the 50th anniversary of his inauguration by hearing his voice reverberate through the rotunda of the Capitol with that beautiful, beautiful inaugural address; and never did I suspect, as Speaker of the House, I would be given this profile and courage award.” Copyright © 2019, ABC Radio. All rights reserved.

Snow squalls and gusty winds expected in parts of Midwest and Northeast
Nearly a dozen ex-military members among those arrested in connection with Capitol riot
“Oh, it’s fantastic!” Diane Lane loves the fans prompting the release of the ‘Justice League’ “Snyder Cut”
Horn helmet-wearing, painted face Capitol rioter should remain in custody: DOJ
‘Cobra Kai’ star Martin Kove had to be “persuaded” to join the ‘Karate Kid’ reboot
Pelosi declines to say when she will send impeachment article to Senate