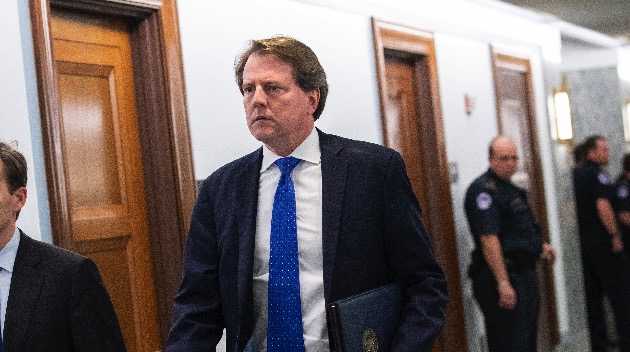 Drew Angerer/Getty Images
Posted on May 21, 2019 by ABC News

(WASHINGTON) — Former White House counsel Don McGahn, as expected, failed to show at a House Judiciary Committee hearing on Tuesday morning after being directed not to testify by President Donald Trump, and the Democratic chairman, Rep. Jerry Nadler, vowed to pursue a contempt citation against him.”Our subpoenas are not optional,” Nadler said at the start of Tuesday’s hearing as he faced an empty chair reserved for McGahn at the witness table.”This committee will hear Mr. McGahn’s testimony even if we have to go to court to secure it,” he said.“The president has taken it upon himself to intimidate a witness who has a legal obligation to be here today. This conduct is not remotely acceptable,” he said.McGahn’s defiance of the committee’s subpoena is the latest episode in the struggle between Democrats and the Trump administration over documents and testimony demanded by Congress.It has led some members of the Judiciary Committee, and even the Democratic leadership team, to call for impeachment proceedings against Trump, in an effort to advance their investigations in the face of what Democrats have described as an unprecedented White House stonewalling of Congress.Amid the renewed internal debate over impeachment, Democrats moved to continue their investigation into the special counsel Robert Mueller’s findings Tuesday, preparing subpoenas for former White House officials Hope Hicks and Anne Donaldson, who served as McGahn’s deputy in the White House.At Tuesday’s hearing, Republicans accused Democrats of staging a spectacle to attack Trump.“The theater is open,” Rep. Doug Collins, R-Ga., the top Republican on the panel, said Tuesday of the hearing without McGahn, and the Democrats’ larger investigation.“Democrats claim we need to dig deeper — deeper than the two years of investigation conducted by what is considered a prosecutorial dream team — because that probe ended without criminal charges against the president or his family,” he said.“Now Democrats are trying desperately to make something out of nothing, which is why the chairman haphazardly subpoenaed today’s witness.”Collins also took a jab at Rep. Steve Cohen, D-Tenn. who brought fried chicken to the committee’s hearing at which Attorney General William Barr failed to show.Trump on Monday told McGahn he shouldn’t tell Congress about events relating to special counsel Robert Mueller’s investigation and in a letter to Nadler, the attorney for McGahn said he “remains obligated to maintain the status quo and respect the president’s instructions. In the event an accommodation is agreed between the Committee and the White House, Mr. McGahn will of course comply with that accommodation.”Nadler, in a letter to McGahn Monday evening, argued that the former White House counsel isn’t shielded from testifying about the episode of obstruction detailed in the Mueller report, and said the White House counsel did not formally invoke executive privilege.He warned McGahn against skipping Tuesday’s hearing, and said the committee would “use all enforcement mechanisms at its disposal,” later telling reporters that the committee would move to hold him in contempt of Congress in the coming weeks.Some Democrats have bristled at McGahn’s dismissal of the committee’s subpoena, and called for Democratic leaders to launch impeachment proceedings to aid in their investigations.”There is a tremendous level of frustration at our inability to get witnesses and documents that are necessary to do our work,” Rep. David Ciccilline, D-R.I., a member of the committee and Democratic leadership, told reporters Monday. “We are getting to that point if Mr. McGann does not appear it will then establish a pattern from this president to not only have obstructed or attempted to obstruct justice as details in the Mueller Report, but an ongoing effort to prevent the American people from knowing the full truth engaging in a cover up and behaving as if he’s above the law,” he said.”The Mueller Report documents a shocking pattern of obstruction of justice,” Nadler said in a statement earlier Monday after news of the president’s direction to McGahn. “The President acted again and again — perhaps criminally — to protect himself from federal law enforcement.”Don McGahn personally witnessed the most egregious of these acts. President Trump knows this. He clearly does not want the American people to hear firsthand about his alleged misconduct, and so he has attempted to block Mr. McGahn from speaking in public tomorrow.”Earlier Monday, in a letter to Nadler, White House counsel Pat Cipollone wrote “that McGahn is absolutely immune from compelled congressional testimony with respect to matters occurring during his service as a senior adviser to the President,” citing previous Department of Justice Office of Legal Counsel opinions, along with OLC guidance specific to McGahn’s testimony.”The Democrats do not like the conclusion of the Mueller investigation — no collusion, no conspiracy, and no obstruction — and want a wasteful and unnecessary do-over,” White House press secretary Sarah Sanders said in a statement Monday.