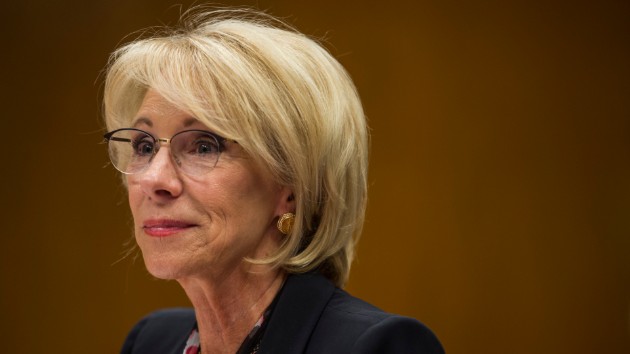 (WASHINGTON) — Advocacy groups on Tuesday asked the Education Department’s internal watchdog to investigate Education Secretary Betsy DeVos’ handling of states’ requests to use federal funds to arm teachers.A letter obtained by ABC News and sent Tuesday to the Education Department’s acting inspector general argues that DeVos broke federal law when she said it was not within the department’s purview to decide how these funds were used by states. Last month, DeVos appeared before the House Education and Labor Committee where she was pressed by Rep. Jahana Hayes, D-Conn., on the department’s stance regarding states using Title IV-A funds from the “Every Student Succeeds Act” to train and arm teachers.DeVos told the committee that she did not believe it was the department’s responsibility to decide if arming and training teachers was a proper use of the funds, and only said that they had “not advocated for nor against” it. Hayes, who in 2016 was the National Teacher of the Year, noted during the back-in-forth with DeVos that a previous legal analysis, done by the Office of Elementary and Secondary Education, contradicted DeVos’ statement. Hayes said that instead, the office’s conclusion advised that “the Secretary has discretion to interpret the broad language of the statute” and stated that “it is, therefore, reasonable for the Secretary to disallow this particular use of the funds absent specific Congressional authorization.” A news release by Hayes’ office following the exchange said the money from this grant program is generally intended to “fund programs like STEM education, drug prevention programs, and mental health services.” The letter, sent by American Federation of Teachers, Democracy Forward, Giffords Law Center, and the Southern Poverty Law Center, said that because of DeVos’ lack of input on the states’ requests, it “likely opens the door to the concerning policy outcome that grantees will be allowed to use SSAE funds to train and arm teachers.” “Secretary DeVos’s repeated assertions – which open the door for states to use these federal funds to put more guns in school, thereby wasting SSAE program resources on costs that by no means serve the goal of the statute – are based on a legally erroneous understanding of the limits of the Department’s authority and violate the Administrative Procedure Act,” the letter reads. In a joint statement, the groups said: “Secretary DeVos tried to wash her hands of the responsibility to decide whether federal funds can be used to arm teachers. But there is no question she has the authority to prevent this dangerous and misguided use of funds, as her own Office of General Counsel confirms, and it violates federal law to justify her inaction with misstatements. The only question here is whether she has the moral courage to keep our children safe.””Separate from any specific policy issues that we care about, we want reasoned decision making from our government and this is you know where the secretary is publicly making statements about her, about legal issues, about her legal authority to do or not do something and that is based on a mistaken view of the law, or even worse would just be an intentional misstatement about her limited authority when in fact she knows that she has authority to act,” said Ben Seel, counsel and legal analyst for Democracy Forward. “You know, that’s not reasoned decision making, that’s not how governments should operate, you should have the best information available to you and you should make accurate statements about what you can and can’t do,” he said. Copyright © 2019, ABC Radio. All rights reserved.