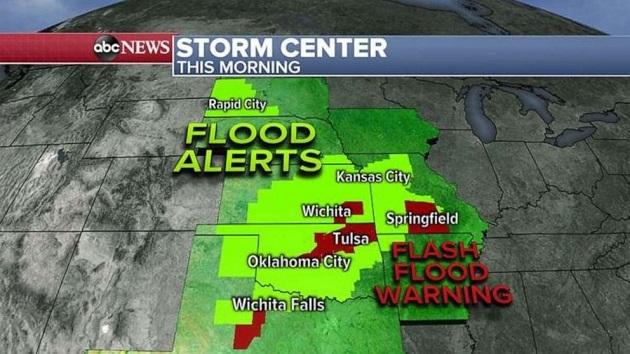 (NEW YORK) — Across Texas, Oklahoma, Missouri and Kansas on Monday there were 18 reported tornadoes among 124 damaging storm reports that also included grapefruit-sized hail in Texas. Wind gusts exceeded 90 mph north of Oklahoma City as damage from strong storms was reported in western Oklahoma and southwestern Missouri.

A flash flood emergency was issued early Tuesday morning north of Tulsa when as much as 8 inches of rain fell. Flood alerts Tuesday morning stretch across seven states, from Texas to North Dakota.On the back end of the system, snow is falling, including in areas south of Denver that saw 9 inches this morning. Parts of Interstate 70 were closed because of multiple accidents due to snow on Monday.The massive storm that’s ravaged the Plains is moving east Tuesday, with additional flash flooding and tornadoes possible in the mid-Mississippi Valley, from Little Rock into St. Louis. Large hail and damaging winds will be possible.Over the next 24 to 48 hours, an additional half foot of rain is possible for parts of Missouri and Illinois.

Amazon driver rescues baby abandoned in Houston, reunites him with mom
Winter storms moving across US with snow, freezing rain and flooding
Arrest made in Indianapolis mass shooting that left five people, including pregnant mother, dead
Wealthy in Hollywood reportedly using private jets, agents, and even bribes to score COVID-19 vaccine
‘Worst Cooks in America’ episodes pulled off air after season 20 winner charged with homicide
Anna Paquin says she’s “too boring” to need a PR person like she plays in ‘Flack’