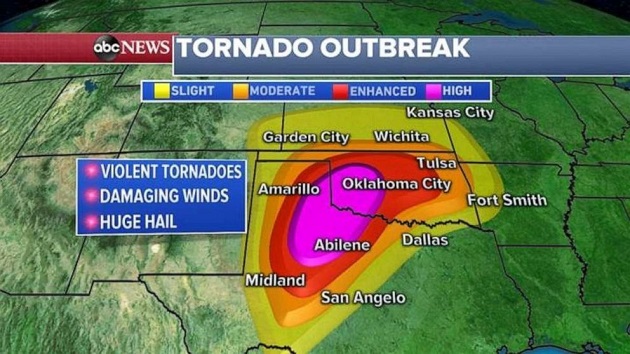 (NEW YORK) — Over the weekend, 41 tornadoes were reported across eight states as severe storms again target the heartland. Violent, potentially life-threatening tornadoes may strike western Texas and Oklahoma as the threat of severe storms stretches all the way into Kansas.Six states also are under flood alerts, with flash flooding a major threat from Texas all the way up to North Dakota.Some areas in Texas, Oklahoma and Kansas could see half a foot of rain.Part of the system that delivered severe weather to the central U.S. over the weekend is moving into the Northeast Monday, producing strong to severe storms — damaging winds, hail or isolated tornadoes can’t be ruled out.The biggest threats will be in from the Hudson Valley toward Albany, New York, and into New England.Severe weather is forecast to continue on Tuesday, with the western storm moving east into the Midwest and parts of the mid-Mississippi Valley.The biggest threat Tuesday will be damaging winds, large hail and a few tornadoes — with the tornado threat largest in the morning.

Wealthy residents got disproportionate share of vaccines in this Texas county
Oklahoma State University basketball coach surprises walk-on with scholarship
COVID vaccination is a challenge for rural hospitals; Texas is having a tough time
Amazon reveals violent content, death threats that led to Parler’s suspension
ICUs at risk of being overrun within days in Austin, Texas
Trump touts border wall in visit to Texas